Usually, puzzle games are very static affairs. You shuffle around pieces and try and get to the solution by figuring out how it all fits together. Otherwise, you have games like puzzle platformers, where you move around and try and interact with the pieces. Other times there’s a fun mix; a game where the parts are moving around, but you don’t control the character so much as you control the environment. That’s the sort of game Molecats is.

I’m not 100% on what a Molecat actually is, but a few hours in and I was guiding them through all sorts of perilous paths. See the idea in Molecats is that the eponymous Molecats (weird looking cats really) need to be guided through a series of tunnels to get to collect items and get to an exit. Levels are made up of squares that have a series of tunnels. The twist is that you don’t control the Molecats so much as shuffle around the tunnels by rotating them.

The developers of Molecats really thought ahead, of course, and there are tools to speed up and reverse the Molecats so that you’re not stuck waiting for them. Moreover, the game consistently introduces new mechanics and the gameplay always feels fresh. It’s very remarkable how such a simple premise can morph and become more complex in just a few short levels. In terms of structure, the game is reminiscent of flash and mobile titles; levels are contained and you get points for collectables and your time rating.

The game does have a ‘story’ of sorts but it’s very silly and lighthearted, and the game’s graphic style is evocative of a strange Saturday morning cartoon. However,  while the Molecats are certainly bizarre in their appearance and demeanour, I ended up finding them oddly endearing, and I think the game’s wacky visual style ends up being a real asset as it lends it some staying power. Music could have been worked on a bit more, but I guess it’s good that the soundtrack isn’t bad per se.

The thing is, while the formula *feels* very simple overall, Molecats morphs pretty quickly into something much more complex. At first, all you need to do is rotate the level segments so that your Molecatscan get to the exit. Then they add more and more complex mechanics until you’re in a mess of keys, reverse movement, plant monsters and a whole mess of things.

Much like a mobile game, Molecats has a ton of content, so expect to be playing for quite a bit. I will say though that the issue is that while the game builds on its central mechanic, it is still fundamentally a game about guiding goofy little critters through tunnels using your wits and reflexes. If you don’t glob onto it early on, you’re not gonna find yourself enjoying it.

Even with the fast forward feature, you’re gonna need quite a bit of patience to content with Molecats, and it’s not really an instant gratification type game. Another gripe I had is that rotating level segments is a bit finicky, and in bigger levels, the maps can get very confusing. However, these small issues don’t detract the cleverness and originality of Molecats.

Molecats was reviewed using a PC digital download code provided by Vidroid. The game was tested on a PC running Windows 10, with an 8GB NVIDIA Geforce GTX 1070 fitted on a 4th Generation Intel i7 4790 3.6Ghz CPU and topped with 16GB of RAM. We don’t discuss review scores with publishers or developers prior to the review being published (click here for more information about our review policy).

• Some levels feel tedious
• Guiding the characters around takes patience

Molecats is a fun, light puzzle game that manages to get some very creative puzzles out of a simple and straightforward central mechanic. If you enjoy games where you shuffle bits of the level around it’s a solid choice.

Review: Brawlout
Be the first to comment!
Leave a reply » 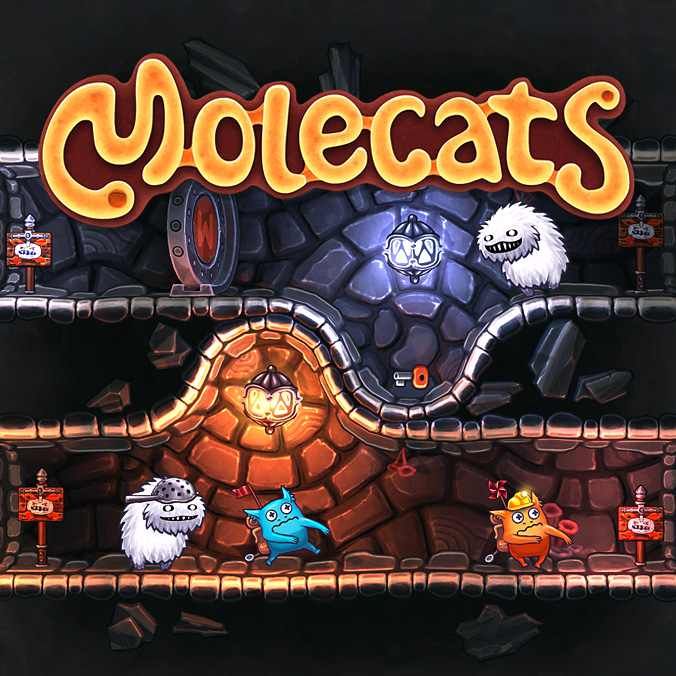