Back in 2014, Warner Bros Games and Monolith Studio launched a new IP based on the universe of Tolkien, which thankfully managed to stand out in vast sea of mediocre Lord of the Rings games, a game known as Middle-earth: Shadow of Mordor (which we reviewed on our site). But despite its undeniable qualities, the game suffered from many problems, such as repetitive missions, a very interesting yet unexploited Nemesis system, and a bad ending for its story. Now 3 years later, the studio is back with a sequel, aiming to fix the flaws of the prequel, and add sufficient new features to become a world-class game, with Middle-earth: Shadow of War.

Before we get into the gist of it, Shadow of War (as well as Shadow of Mordor) is not a videogame adaptation of Tolkien’s work, but rather an original spin-off in its own right. Nevertheless Middle-earth: Shadow of War has many similarities of the movie trilogy that most of you know, as it shares the same type of artistic direction and presents some key figures of the Tolkien universe such as the Witch-king of Angmar, Gollum, Sauron and many more. Nevertheless, the story of the franchise has always been coherent with the lore of Tolkien’s books, happening decades before the War of the Ring, and how Minas Ithil fell in the hands of the Witch King of Angmar to become Minas Morgul (which you probably remember from Lord of the Rings: the Return of the King).

For those of you who have not had the opportunity to play Middle-earth: Shadow of War, you play as Talion, a Ranger of Gondor who has received powers from Celebrimbor, a specter that wanders between life and death, who forged the Rings of Power. This wraith was a good opportunity for Monolith to give our mere human extraordinary skills, like becoming invisible, gaining super-speed and a whole bunch of very deadly orc-killing powers. All that, without counting of course the magic of Isildur’s Ring, which transforms Talion into a Bright Master, making you almost an equal to Sauron.

Having a ring of power is a totally enjoyable aspect in the game, because it is precisely around this scenario aspect that the whole universe runs, and introduce most of its features. The latter is also totally dependent on the Nemesis system which is one of the cornerstone of this open world adventure. To make it simple for you newcomers, the world of Middle-earth in this game is always alive and changing. Sauron’s armies are structured, and the Orcs are dominated by captains who themselves are under the command of different warlords. Each enemy of this system has its own characteristics, personality, history, and can be promoted or degraded on the social scale of Sauron’s army. If an Orc kills you, then he might become a captain, or higher to even becoming the right hand of a warlord, pitting rivalries between other Orc captains, which brings its own internal politics and backstabbing. Needless to say that the Nemesis system is more complete now, and actually and offers many improvements and depth in comparison to the first opus.

The ring in your possession will allow you to corrupt Orcs and force them to join your rank of influence. Your army operates in exactly the same way as Sauron’s, with the same structure. To recruit a captain, you have to be able to defeat him, and it is only once his morale is broken that our ring can take possession of his mind. What a joy to be able to recruit Názkûga the Conqueror, or Blorg the Terrible… Because yes, each captain is unique and has its own characteristics, back-story and different looks (mostly really ugly). You are never immune to great surprises with this system, especially as sometimes Orcs can ambush you and fiercely combat you and your trusty Orcs, which brings me to jump on the topic of the game’s difficulty.

While in some cases you can chain dozens of Orcs and skilfully massacre them alone, other battles will pit you against two captains and over 20 soldiers, which will pretty much force you to retreat and reassess the situation. Because like in the first game, if you fall on the battlefield, a QTE system will give you a chance to get up, but some Orcs are so powerful that this one is almost unfeasible. You then find yourself completely incapable of defeating an Orc captain, because either you he became too powerful because of his numerous defeats against you, or he’s got extra tricks up his sleeves like calling an entire horde to surround you. Nevertheless, while this might be problematic for rage quitters and impatient gamers, this is one of Shadow of War’s greatest traits, and probably one of the best systems of open world games around.

If you think though that the Orcs are the only threat in Middle-earth: Shadow of War, then guess again. The game bestiary is still as large as ever, and you’ll have to fend some dangerous beasts such as Trolls, Graugs and the Caragors (they are analogous to big cats like lions in comparison to Wargs which are closer to wolves). The later, are also formidable mount and can be tamed in the wild to serve you as an animal servant.

Globally everything that populates the world around you will at some point be able to serve your purpose and goal. It all depends on your skill level, and point attributed to each one, which is done via a skilltree in the menus. Globally identical to what one can expect in an RPG, the game has also a loot system, with new weapons and armors that you can find after defeating enemies, to help you in your war. In any case, the game is rich enough in content and possibilities to avoid the ubiquitous problem of the repetitiveness of the first component when it comes to battles, as captains are more varied and have different traits to take in consideration.

While the game is far from being a blunt copy of Assassin’s Creed, it is almost impossible to miss the comparison of the similarities in their “free run” and climbing system which is quite close. Except that contrary to the different assassins in the Ubisoft franchise, Talion can climb with inhuman speed thanks to the power of the ring. A fun addition that make these scouting part of the game faster, but a bit too rushed, as I liked that sense of human strength in the previous game.

But if Shadow of War has found the right ingredients to greatly enrich its gameplay and establish itself as a trustworthy suite, it is nevertheless not free of defects. Technically for example, the game displays the same gaps that it was in the first episode, with textures that are rather almost in between both old and new generations. If Talion and the Orcs look more detailed in terms of modelling and animations, the game remains rather uneven in its environments and settings. I do realize that Middle-earth is not the most appropriate place to offer us landscapes of absolute splendor (in comparison to the Legend of Zelda: Breath of the Wild this year), I still would’ve liked some elements to be more endearing, varied and not give the feeling of have been duplicated over several spots in the game.

Nevertheless, Monolith has made a true effort since the first episode, proposing more varied places. Between the cities inhabited by humans, to the fortresses stuffed with Orcs, and even forests and snow-capped mountains, the game gives us this desire to travel more in Middle-earth. However, the graphic engine definitely shows its limits, with textures not always crisp, numerous clipping (at least on the normal Xbox One) and certain animations of Talion, like the way he runs, can remind you that this is not the standards of high-end AAA game in 2017.

Middle-earth: Shadow of War was reviewed using an Xbox One copy of the game provided by Warner Bros Interactive. The game is also available on PlayStation 4 and PC via digital and retail releases. We don’t discuss review scores with publishers or developers prior to the review being published.

• A better looking and managed open world.
• The variety of enemies and captains.
• Forging your own army to fight against Sauron
• The updated Nemesis system.
• Great lifespan
• Great voice acting and a better story than the original

• The soundtrack is rather weak, only powered by couple of the movie's key tracks
• Some fights can be too difficult to manage
• Still a bit repetitive in terms of combat
• Technically and graphically outdated

Middle-earth: Shadow of War is great sequel even if it still carries the fault the original game. At least, the Nemesis system now truly feels alive and makes it one of the greatest game mechanics applied in a game. All the strengths of the previous game are reinforced, unfortunately some problems persist and I regret mostly the rough technical side of a game that could look much better for a 2017 release.

More Goodness
AdventureFantasyFeaturedLord of the Rings 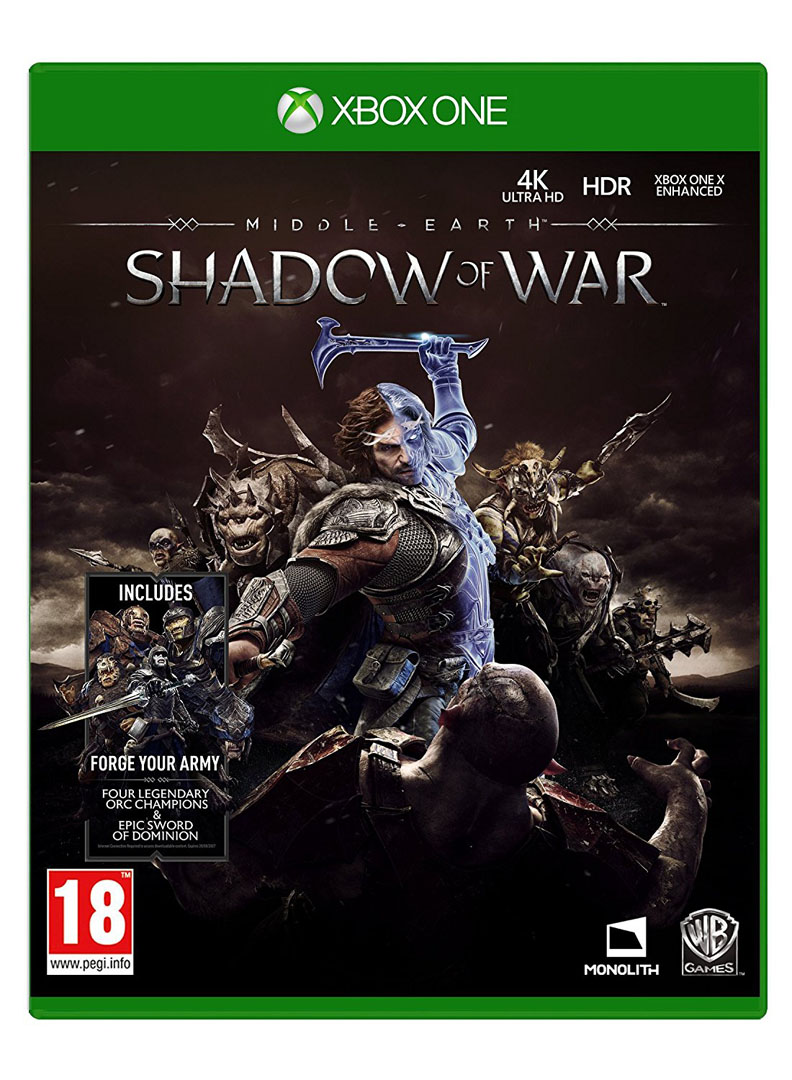