Every time I look at the independent gaming scene, the trend is to be heavily influenced by another game and create something different based on it. The results are that a big chunk of these productions plays the pixel-art card, chiptune music, or bank heavily on the mood of the game and its story instead of going nuts with development cycles. However, some diamonds in the sand emerge from time to time, without even expecting it, including Metropolis: Lux Obscura now available on all major platforms.

Before we get started, note that this is yet another game from Sometimes You, which thrives on publishing small independent games on the major platform. After getting good buzz among PC players on the Steam platform last year, Ktulhu Solutions’ release on consoles is here as mainly as a port with a reduced price range of just 8$. But then, what do you expect for such a small price?

Well, it’s simple, this adventure game from Ktulhu Solutions is a sort of interactive comic-book merged with Match 3 gameplay mechanics. In fact, scenes with bubbles and boxes are only cinematics, varied and drawn with a Sin City style brush where the only color poping is red in a black and white canvas. Concretely, you will have to travel on the map of the game via a menu in top view, by choosing in which location of the city you wish to go and advance throughout the story. Metropolis: Lux Obscura’s story is one of Jon Lockhart, a criminal who finally got out of jail, after being wrongfully sentenced for the murder of his best friend. His journey to find answers will take him to a strip club, a dark alley, a mafia boss’ restaurants and many other places in which it is better not to poke its nose, especially when everyone seems to have some sort of beef with you.

The cutscenes are numerous and, in addition to offering an absolutely sumptuous artistic direction that the fans of Sin City, Max Payne or even The Wolf Among Us will absolutely like. But heads up, this is not really a game to be played in public or for kids, as some scene are quite “raunchy”, with a couple of animated sex scenes, and some extremely oversexualized woman which is part of the art direction (which you can see in the screenshots above). In terms of music, Metropolis: Lux Obscura is paired with a fitting jazz-influenced soundtrack even if it seems a bit repetitive. But at least it doesn’t affect the gameplay, which on its own is a bit too simple for my own taste.

As you most likely guessed from the setting of the story, you will have to fight your way in this city rotten by corruption, and this is where the game will probably lose a good part of the general public. Battles and brawls in the game are solved with a Match 3 way, on the same principle as a Bejeweled or Puzzle Quest, which are not so bad. To tell you the truth, I easily got the gist of it, as the system is quite simple where you need to align 3 and more tiles which will then do a combat attack on your opponents, and hopefully reduce his life points while protecting yours with other matches. The only concern is that the thugs to fight in question are always stronger than you in terms of damage done and health, which adds a challenge but still manageable. There is though extra side RPG element to the game, as each successful fight won will let you activate one of 12 different passive abilities, which activate randomly with RNG mechanics, such as “flicking the bird” which will push your opponent to miss his turn.

Nevertheless, and even with some difficult fights against 3 enemies in a row, it only took me 2-3 hours to complete the game and watch every single one of the four endings. Each ending is different, linked to your progress in the game, but the outcome is quite the same. Considering the price range, I think that’s a bit short of a lifespan when bigger ones are just a dollar more expensive.

Metropolis: Lux Obscura was reviewed using a Nintendo Switch digital download code of the game provided by Sometimes You. The game is also available on Xbox One, PlayStation 4, PlayStation Vita and PC via digital release. We don’t discuss review scores with publishers or developers prior to the review being published (click here for more information about our review policy).

While the recipe is different with its noir-style comic storytelling, Metropolis: Lux Obscura is just a simple Match 3 that ends quite fast. For the price asked, I can't really recommend this game.

An accomplished, award-winning gaming professional with more than 12 years of experience in the videogame industry, Nazih Fares has worked in public relations, marketing, eSports and localization for over 14 different publishers and more than 90 global brands. Fares is currently MENA Communications Manager at Blizzard Entertainment, based in The Hague. His views on this site are his own, and not those of his employer.
More Goodness
AdventureFeaturedIndieMatching Game 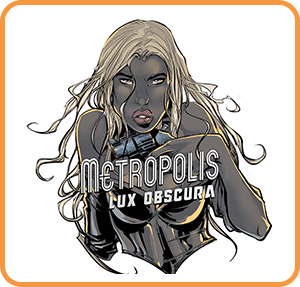