By announcing Metal Gear Survive back in the summer of 2016, Konami was highly not the most popular kid in the industry. After the departure of Hideo Kojima – and the many controversies surrounding him leaving – the Japanese company suffered a big lash from the gaming fans and the series’ creator. Now 2 years later, Metal Gear Survive is finally out, fuelled by the Fox Engine, and beyond all the corporate politics that lurk around this kind of controversial output, we can finally review Konami’s game.

Before we start, I should note that Metal Gear Survive is a spin-off in the franchise, the likes of the 2013 Metal Gear Rising: Revengeance (which I really love, but I’m biased considering I worked on that title). Now this new game does not intend to impose itself as a sequel to the series, but as a complementary title, wading smoothly in the gameplay and mechanics of Metal Gear Solid V: The Phantom Pain (and its prologue Metal Gear Solid V: Ground Zeroes). We control a former Mother Base mercenary, tossed into a parallel dimension world called Dite (pronounced Dité or Diteh and not Dyte). We’re not really going to get into the details behind the script, because in the end it’s just a pretext, and I shouldn’t really spoil the plot. All you really need to know is that this parallel world use areas of Metal Gear Solid V, and even if that is controversial to use those assets from the last Kojima and Konami game, it remains consistent in a universe already known for its freedom.

Now the word Survive in the title is the best characteristic in terms of gameplay when compared to Metal Gear Solid V. You’ll find pretty much the button layout and handling of the source game, which includes the use of many objects and gadgets via a multitude of shortcut. But unlike Snake’s last adventures, there’s extra elements added including hunger, thirst or even oxygen in some cases, that you’ll need to watch constantly, like Don’t Starve and other similar games. Regularly, you will have to hunt or find anything to consume, to make sure you don’t collapse in action, and you’ll have to make sure each of the “survival” gauges doesn’t drop below the 0 mark. If you can’t, you’ll start seeing harmful effects of your hunger and thirst, such as having blurred vision, no endurance to run away from enemies, and most importantly, your life points start decaying until you eventually die. In this, Metal Gear Survive is quite effective in its survival mechanics, and at putting pressure even if I found it exaggerating the way thirst and hunger resource points are scattered, especially at the beginning of the story.

Moving forward in the game, you discover new elements to advance your base, in which will be used for crafting. With all the resources found during our ventures into Dite, we learn to make new tools and more powerful weapons to survive the threats. Just like Metal Gear Solid V, you really have a monstrous arsenal which forces you to make choices according to the methods you want to use. But the management of the base goes through so many elements, such as resource, crafting, defense or even exploration facilities. But why have so much to manage? Well, that’s because you are not alone in this world whether you’re playing solo or multiplayer. Throughout the game, you will find survivors which will join your base and allow it to evolve according to their skill set. It is necessary to gauge their capacities to put them on proper assignments, but also to take care of their health so they can fight against disease, hunger, and even enemies.

Yes, because I probably forgot to mention it, but the world of Dite is not a peaceful one, as you will have to defend yourself and your base against enemy assaults, which are a sort of infected humanoids, all sharing weirdly enough the same material horn that Snake had in Phantom Pain. These mindless creatures are closer to zombies than anything else, with 3 archetypes, which are just powerful in numbers, but easy to beat on their own. They will from time to time advance on your base, which will rely on you to manage and place various traps and beat the waves. In short, it’s a rather fun horde mode, but nothing groundbreaking in terms of innovation.

The principle of Metal Gear Survive can be seen as simple as it can be, but effective. However, even if we do not reveal all the missions that you will have to deal with throughout the story, you’ll need to learn that there’s a whole lot of repetitions and certainly a lack of diversity. But some areas in Dite offer special game mechanics and conditions which is a sort of mist-like substance that engulf regions on the map. Simply known as Dust (yes, quite the imaginative name we got here), it requires you to wear an oxygen mask and monitor your endurance, which runs out much faster, adding extra pressure on the player. It’s a welcomed difficulty at times, even if the orientation problems that this haze generates can be painful.

So what about multiplayer which we briefly mentioned above? Like its spiritual predecessor, Metal Gear Survive tries to mix singleplayer and multiplayer into a coherent experience. Playing with others is not its own mode, and missions in coop integrate with the rest of the adventure (like the recently released Monster Hunter: World which we reviewed), allowing you to go with several players to save a survivor or to collect resources for example. These are always well-defined sessions, both in terms of time and play area. The most common type of mission is the protection of an excavation point, which requires a minimum of strategy to avoid being overwhelmed with enemy waves. But I do have to say that the servers are rather cranky, and the slight small internet issue will toss you out of the game completely, which is going to be problematic for a lot of people. Yes, like Destiny and some other games, Metal Gear Survive requires a constant internet connection and doesn’t have an offline mode in any shape or form.

If until then, we could see Metal Gear Survive as a good game mixing action, survival and resource management, I must still note some more or less major problems, all related to the desire of Konami to make his game a profitable product on the long run. While I have no issue with the desire of a publisher to make sure there’s steady income, especially given the fact that the game is cheaper than other AAA titles ($39.99), I will reproach their method. The online store is a little too noticeable, with its in-game currency called SV Coins, which allows you to buy boosters and defense measures. But the worst part is not all these purchasable game shortcuts, that are mostly meant for the impatient player, but rather the fact that wanting to create another character with its own save slot will cost you the equivalent of $10 in SV coins!

But even if you forget these greedy microtransaction mechanics, the game also has some issues on the technical front. You see, the game might use the Fox Engine created by the Kojima Studio, but you can feel that the core development team is still trying to figure out how to optimize it. While I didn’t get to try all the platforms during my review, I mostly played the game on both the Xbox One and its upgraded version, the Xbox One X, which had very different results. The base Xbox One is a disappointing 720p output with frame rate playing between the 40 to 60fps mark, which considering the previous Fox Engine game’s 900p and 60fps (Metal Gear Solid V), is a bit of a joke. On the other hand, the game is noticeably better on Xbox One X, with a native resolution of 2560×1440 (true 4K), with beautiful HDR textures, except little – yet rare – framerate drops when there’s a lot of things on the screen, especially in Dust areas.

Metal Gear Survive was reviewed using an Xbox One digital download code of the game provided by Konami. The game is also available on PlayStation 4 and PC via Steam in digital and retail releases. We don’t discuss review scores with publishers or developers prior to the review being published

Taking gameplay mechanics and foundation of its spiritual predecessor, Metal Gear Survive is an interesting mix of survival, resource management and action game. Its constant internet connection, lack of variety and sub-par technical performance might push away some players, but it's still a solid game that could get better if properly updated over its lifespan. 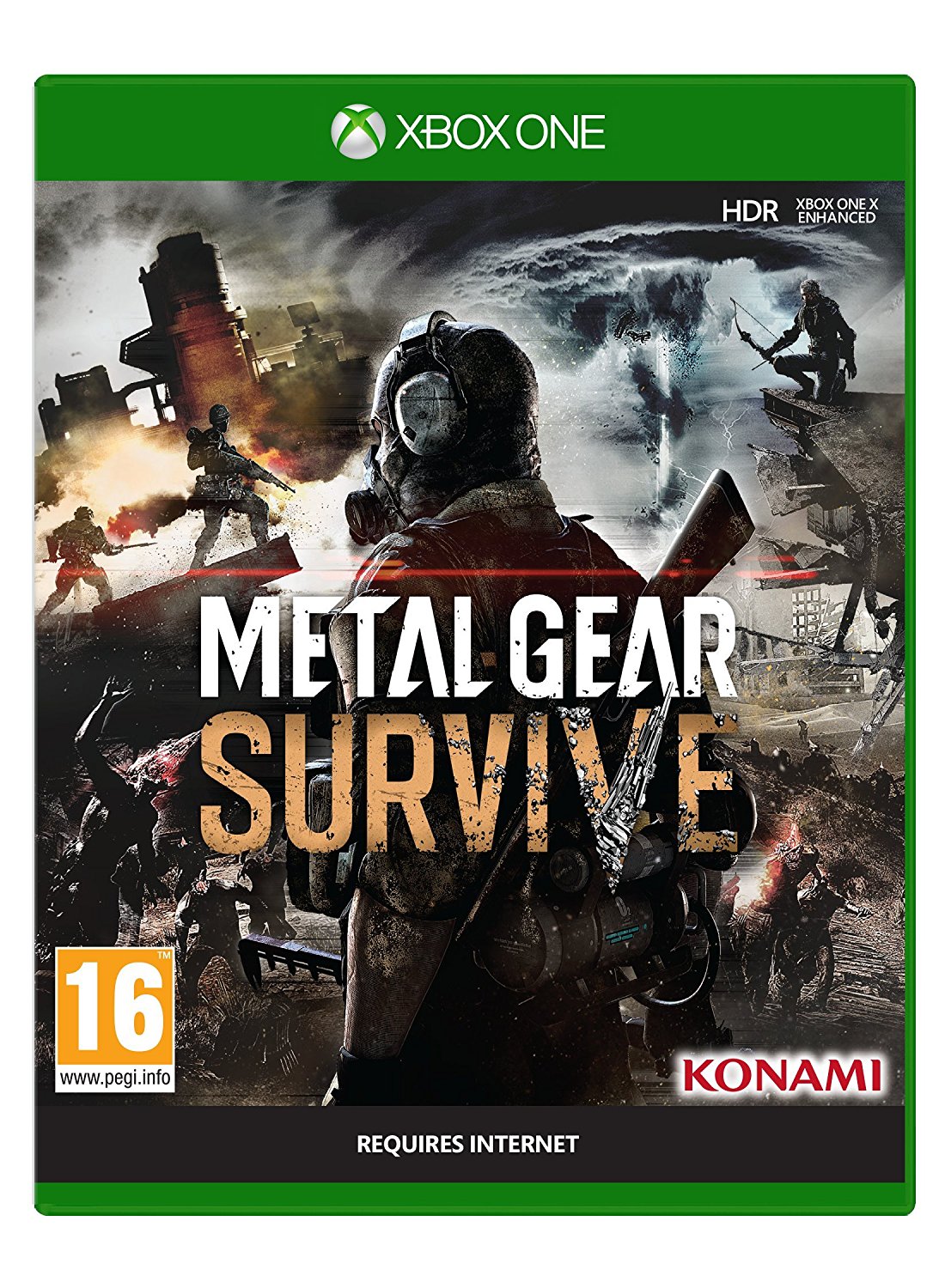