If there was a title for awesome DUMB games, Let Them Come would be nominated for the grand award. This new 2D shooter is as simple as they come. It is you and a turret against a nonstop attack of alien monsters.

In Let Them Come, you have it all, creepers, crawlers, flying monsters, alien zombies, the list goes on and on. All you have at your disposal is that turret and your anger management issues. Every alien you encounter is diverse. Each of them have different attributes and appearances with the occasional bosses. But do not fear, if your turret fails you the scary arsenal of grenades, blades and other secondary weapons can balance the scale.

Let Them Come’s story is straightforward, the aliens are breeding in the galaxy and are spreading like a disease. The vessel got attacked and you were the only soldier that survived. Now you need to gear up and stand your ground.

The game does indeed have a simple gameplay however this indie title does have its sweets spots when it comes to attention to detail. The muzzle of your gun is used to illuminate dark areas, explosions are your source of light and the remains of dead aliens do not shy from coating the walls and dripping of ceilings.

In terms of mechanics, it is as simple as Let Them Come’s design. Your mouse is your main ally. You tilt down and up and aim at enemies as they come. The objective is to shoot them before they come to you. Classic arcade action packed game. Every time you die, you go back to that sitting down position to rethink your strategies and access the inventory. You can buy new upgrades to the weapon based on the gold you managed to accumulate. This needs to be planned carefully since every enemy is different a specific plan of attack. My favorite area of the inventory is the Boom Box where you can select which track you are going to have while rampaging on those creatures.

Let Them Come is set to come on PC, Xbox One and PlayStation 4, however I strongly recommend that the publishers think of mobile devices as well as the simplicity and addictive nature of such games would fit that platform better.

Let Them Come was reviewed using a PC downloadable code provided by the Versus Evil. The review was done on a PC running a Windows 10 Home, Intel Core i7-7700HQ processor set at 2.80 GHz, 4GB NVIDIA GeForce GTX 1050 Ti and 16GB of DDR3 Ram. The game is also available on Xbox One and PlayStation 4 via digital store releases. We don’t discuss review scores with publishers or developers prior to the review being published

• More fit to be a mobile game
• Gets too repetitive

Let Them Come is everything you need to waste time while on a flight, in a cab or in the metro making it the perfect game for mobile platform. Let us just hope the developers move towards that platform as I do not see it succeed on PC 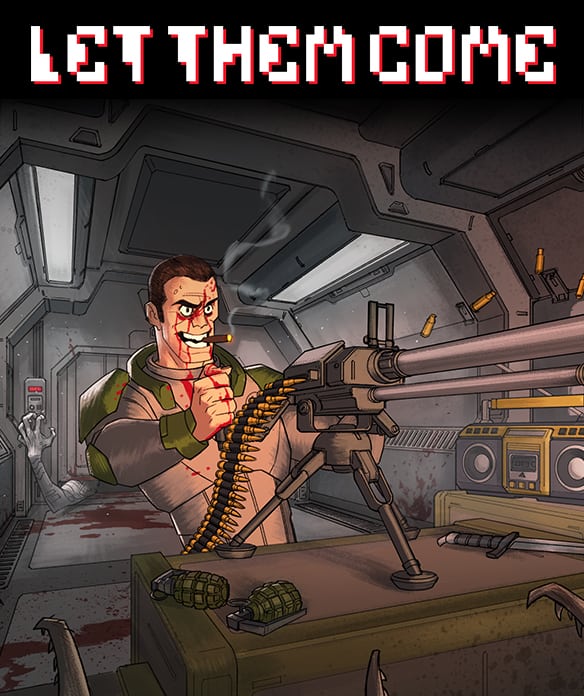