Over the past 2 decades of its foundation, Traveler’s Tales has been known to bring popular culture franchise into games, ever since their start with Pixar games, and eventually the LEGO game series. After countless versions of LEGO video games based on the Avengers, DC Comics and more, it’s now time for them to go back to their original source of inspiration, with an adaptation of Disney Pixar’s The Indestructible.

As soon as you boot up the game, players are propelled into the heart of the adventure. LEGO The Incredibles begins right where the first film ends, with the onslaught of the Demolisher against the city, and members of the Parr family then combine their efforts and their powers to get rid of this danger. Without wanting to reveal too much, it is, therefore, a strict adaptation of the second The Incredibles movie, released in theaters roughly a month before this review. And so, after getting rid of the Demolisher, the Parr are approached by a certain Winston Deavor, who wishes to help them out to restore the “tarnished” image of superheroes in their world. Believing that Elastigirl is their most “presentable” person when it comes to public appearances, Deavor sends her on a mission while Mr. Indestructible takes over the house chores and cares of the children.

The game then pits players into six levels, allowing to go through the entire synopsis of The Incredibles, which shouldn’t take more than 4 hours. Fortunately, the player can then relive the adventures of the first film, with a series of extra levels which will take about the same amount of time to finish, filled with the humor inherent to all LEGO game adaptations: fun and witty, without being hilarious. It is unfortunate to note that the humor part is actually under-exploited, especially when we know that the original work already brings with it its own moments of humor and really awesome puns.

While I played LEGO The Incredibles on Nintendo Switch mostly, I went ahead and checked it out on the PlayStation 4 Pro as well, to see the difference in rendering. In TV mode, the Nintendo Switch graphics rendering is basically the same as I’ve seen on the PS4 Pro, with mostly only the display distance varying. This is also the case in Portable mode, which shouldn’t surprise anyone since LEGO games are not really demanding in terms of engine and graphical processing. However, we still had some technical issues on some textures of characters, taking 2 seconds to load which is noticeable in closer camera angles, like during cutscenes. Finally, there’s very slight framerate falls, again during these same cutscenes, but in the end, nothing significant that spoiled my gaming experience. What did annoy me though are the very long load times, which are even longer on the Nintendo Switch, ranging from 1 to 2 minutes from one level to the free play area.

LEGO The Incredibles’s gameplay remains the same in this new iteration of LEGO games. The player will spend most of his time destroying everything in his path, collect studs and beat up enemies. The fights are always so tactical: it is enough for the player to hammer the attacking key to getting rid of the opponents, knowing that from a number of successful kill chains done, your character can trigger a devastating super-attack. On that front, there’s a large number of characters, with a multitude of capacities and powers classified in about forty categories ranging from brute force, elasticity, ice wielder, telekinesis, etc… These skills will be crucial during the exploration of the city and replay the main adventure levels as they open up new parts.

In general, LEGO The Incredibles retains the accessibility specific to all Traveler’s Tales’ titles. Whether during main story missions, or the exploration of the city, everything remains pretty much like a routine or guided by the hand. Thus, an arrow indicates the path to follow, the elements with importance are highlighted, powers to use to unlock a certain area is indicated by a small pictogram… In short, the title is primarily for the general gaming audience, and it’s too bad that a real challenge is rather absent.

The interest of the title lies in the possibility of freely exploring both Municiberg and New Urbem cities, both split in different neighborhoods. Each of them includes a number of challenges and objectives to accomplish, as long as the player is willing to inspect every nook and cranny, such as catching pickpockets, save civilians from delicate situations, or anything you would assume is part of a superhero routine. Among these challenges, one of them takes a prominent place in the game which is crime waves. When a district of the city is in the grip of a crime takeover, our superheroes must then intervene in several parts of the district to help neutralize the threat. Once the objectives of the crime wave have been completed, the player can then consult on the map all the points of interest of the neighborhood that has been saved, helping to reach a 100% completion and collectibles in the game.

That’s mainly because if you are used to these games, LEGO The Incredibles has a legion of things to collect, like the famous red and golden bricks scattered in the city, which some are only accessible by the accomplishment of various objectives. Finally, with more than a hundred characters to unlock, – even if some are just variants of the main characters or mere extras of The Indestructible movies – others put us in the shoes of key Pixar movie characters, including Nemo or Merida from Brave. And so, like all other Traveller’s Tales games, if the main LEGO The Incredibles adventure ends in 8 hours or so, you can well triple that number of hours if you expect to reach full completion.

LEGO The Incredibles was reviewed using a Nintendo Switch digital download code of the game provided by Warner Bros Games. The game was is also available on PlayStation 4, Xbox One and PC via digital store releases. We don’t discuss review scores with publishers or developers prior to the review being published (click here for more information about our review policy).

• Two full movies in one game
• Two large free play cities full of extra activities
• Powers of the characters.
• References to other Pixar films are cute

• The core adventure is rather short.
• Really slow loading time on the Nintendo Switch
• It's time for Traveller's Tales to change the formula

As you would expect it, Traveller's Tales has no intention to change its formula with LEGO The Incredible, and that's starting to be shameful. 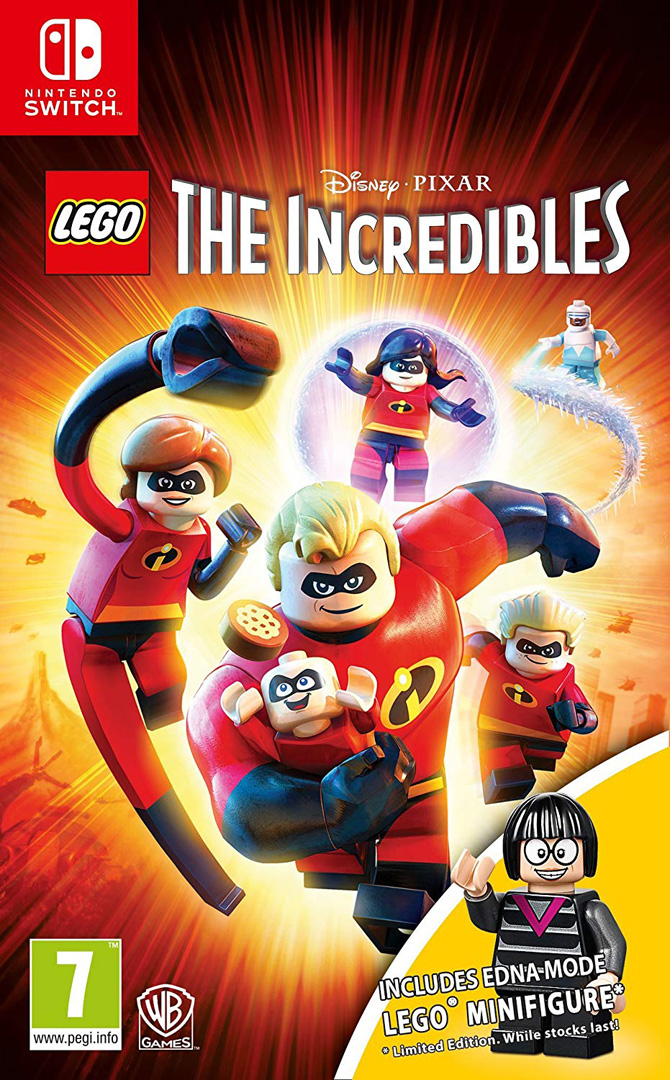