At the risk of getting close to overdose, Traveller’s Tales takes advantage of this end of the year to give us one final 2017 LEGO adventure. After the adaptation of the LEGO Ninjago movie, it is now Marvel heroes’ turn to make their comeback nearly 4 years after their last adventure (2013 to be exact). While this production does not intend to revolutionize the basics of the series, LEGO Marvel Super Heroes focuses on its roster and the variety of places and themes it can have fun with, especially since it’s the game isn’t linked to any movie franchise release. Now it’s all about whether this title has enough power to please fans of the Marvel movies and comics and  to the general public.

As mentioned, LEGO Marvel Super Heroes 2 is not linked to the epic timeline of the Marvel Cinematic Universe, and so developers have approached Kurt Busiek, the author of the Avengers Forever comics to help with a scenario for the game. The latter, relying on the base of the first LEGO Marvel Super Heroes, decided to follow the course of history by imagining a great journey between different worlds, filled with superheroes and villains from various times and universe. Depending on your journey, you’ll cross no less than 18 different destinations such as Manhattan, Ancient Egypt, the Far West, future New York, and embody many characters, some of whom have never appeared in video games. Each of the heroes (and villains) have their own unique way of fighting and I love the possibility of instant transformations for key ones, like Peter Parker switching to Spider-Man, Bruce Banner to Hulk, etc. Initially, it’s a little disconcerting, since Rocket has an original way to move for example, but we get used to quickly. Now, if the universe is nice to discover, we can not say that the gameplay is more innovative… Sadly, it is rather the opposite.

For years, I’ve seen the studio lack of taking risk with every single game they do, and it is certainly not this episode that will change the situation. Once again, it will be a question of destroying and reconstructing elements of the set, interacting with mechanisms, indulging in some QTE and other phases of shooting, challenging bosses or solving simple riddles to access other areas. Suitable for a wide audience, the game is still really rough at times and it is not always easy to guess the way forward. Although you have access to quick tutorials by pressing the left stick, the objectives are far from clear, even if your other characters sometime try to spell it out for you. So certainly, by dint of going around in circles and trying everything and anything, we finally get there but it lacks fluidity in the progression. In the same way, the combat, in spite of the different sequences, lack interest and sometimes give the impression that you are not in control. But let’s be clear, this is not a disaster of a gameplay, but we often have the feeling that its foundation is set between two legs, torn between the desire to be accessible to all and anxious to be varied enough to fill the seasoned gamer. But is this enough o a reason to not play the game? Well, my answer is no.

Despite the flaws in LEGO Marvel Super Heroes 2, the game manages to hook the player through its pace and different situations. For a dozen hours, it is a pleasure jump from one hero to another in an adventure that is varied and punctuated with various gameplay sequences like mini-games, fighting bosses, exploration and side-missions. If some will regret, initially, the presence of stage borders materialized by a sort of holographic greenish barrier, it is necessary to know that these will disappear after a while, giving freedom to the player to walk in the heart of the open world. It is truly at this moment that the adventure start kicking off, especially as the variety pays off with a lot of extra details, such as superb underwater passages, and slick special effects used to bring density to environments. The graphic engine is neat and animation showed at rare moments signs of framerate drops on our Nintendo Switch version, but barely any on the Xbox One X. Apart from some aliasing, there is not much to blame to LEGO Marvel Super Heroes 2 on the visual front. On the other hand, the music is nice but too hushed in the background, and voiceover lines are sometimes over-abused even if it remains in the delirious spirit of the saga.

Speaking of the Nintendo Switch, fans of the portable console will be happy to know that LEGO Marvel Super Heroes 2 on this platform is the full version as others. Certainly, LEGO games are not graphical or performance monsters that put a console on their knees, but it’s always nice to know that you will have the same game that other platforms will receive. It’s great, because in the past, LEGO games have been historically changed for Nintendo consoles, whether it’s cutting characters, removing DLC or even making a shorter story mode. Here, even if the Switch is less powerful than the PlayStation 4 or Xbox One, there will be no compromise for LEGO Marvel Super Heroes 2, in addition of the ability to play instant cooperative mode by sharing each a Joy-Con, whether for story mode or for arena fights. But there is a bit of compromise in term of performance on the Nintendo Switch, as the game can sometimes stutter in handheld mode, text are rather difficult to read sometimes, and finally the loading time between missions are a bit too long.

Beyond the heavy load of collectible like most LEGO games from Traveler’s Tales, with 236 heroes and villains to unlock, “Stan Lee” to help through each levels, challenges to accomplish, golden bricks and more, LEGO Marvel Super Heroes 2 also has a fresh new standalone multiplayer mode. In addition to the fully playable campaign in split-screen mode – which is still one of the spearheads of the series – up to 4 players can now join in two new modes. The first one, is reminiscent of Splatoon 2 since it is about conquering territories with the help of painting. From time to time, special items appear and expand the area covered or speed up your avatar. The second, takes a bit of the concept of Power Stone. To put it simply, players must recover a stone (which appears randomly on the field) and keep it until the timer on the clock ends, either by fleeing or fighting. The goal is to recover as many stones as possible to increase your points and win. Finally, know that the game offers a publisher to create your very own hero from scratch. Unquestionably fun, this new episode will appeal to the greatest number and to those who love LEGO games but sadly lacks innovations to reach new heights.

LEGO Marvel Superheroes 2 was reviewed using an Xbox One and Nintendo Switch retail copy of the game provided by Warner Bros Interactive. The game is also available on PlayStation 4 and PC. We don’t discuss review scores with publishers or developers prior to the review being published

With a better story than the original, LEGO Marvel Super Heroes 2 fills an insane amount of Marvel lore thanks to a plethora of heroes, villains and places to visit. Even if the formula remains unchanged and we would like TT Games to take more risks, the game is still fun, on top of several new multiplayer modes.

An accomplished, award-winning gaming professional with more than 12 years of experience in the videogame industry, Nazih Fares has worked in public relations, marketing, eSports and localization for over 14 different publishers and more than 90 global brands. Fares is currently MENA Communications Manager at Blizzard Entertainment, based in The Hague. His views on this site are his own, and not those of his employer.
More Goodness
AdventureFeaturedLegoLEGO Games 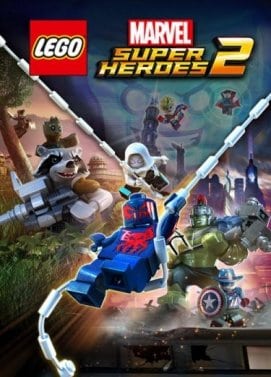