Every game has to offer its own vision and way of doing things, and Lawbreakers gets its vision from quite the visionary, the outspoken and always entertaining Cliffy B. His studio Boss Key initially pitched Lawbreakers as free-to-play, but this FPS ended up going the traditional route. A very good thing. LawBreakers goes for a simple style of fun: arena shooting with lots of rushing, jumping, and zero gravity

LawBreakers is a new hero shooter, in the same style as fan-favorites like Overwatch and the upcoming Quake Champions. Hero shooters have been the latest craze, and we’re likely to see more of them in the next few years. Of course, calling a game a hero shooter doesn’t say much about its core mechanics; it’s more a style than anything. Does Lawbreakers manage to carve out its own niche in the genre? Let’s find out.

Now while arena shooters trace their DNA back to the PC, lawbreakers got off to a bad start in my testing. Basic PC-oriented features like a server browser, favoring a console style interface. There’s no real “PC master race” fan service here. You end a match and jump back to the lobby again.

This is especially problematic considering Lawbreakers had a bumpy launch, and it’s currently dealing with a shrinking playerbase. When you go with a matchmaking system it can be tougher to find games, so expect to be waiting a little before you jump in. It’s not exactly dead but for a recently released title the wait times are noticeable.

While the multiplayer experience is a bit tricky, the core gameplay redeems the title. The maps are designed symmetrically to allow two teams, the Law and Breakers (like in the title!) a shot at the objective. It focuses on symmetry, which may not be groundbreaking, but it’s definitely more consistent.

The big plus point of the title obviously lies in zones of gravity zero, which makes all the charm of the levels. In a very simple way, in the middle of each map is more or a less large area in which our hero is in total weightlessness. Unfortunately, this aspect is revealed to be underexploited, as we would have liked maps totally in weightlessness, or wider areas with this configuration.

However small the arenas, we still see some epic gunfights and especially to offer a great verticality. Unfortunately, we soon realize that some maps are very poorly adapted to certain modes of play, giving rise to totally desperate situations. On “Overload” (Capture of Flag), the game gives way to great moments of solitude and floating where one often finds himself alone to manage 3 see 4 opponents at the same time. Because yes, each character has a very particular way of moving, and they are all very far from being equal in speed. If the idea is good, it causes a time-out fair, which tends to break the rhythm too often. Especially since level design is far too uneven from one card to another. Too small for some game modes, too big for others.

The gameplay is divided among several classes. You’ve got basic ones like Sentinel and Mercenary, tanky ones like the Titan and leviathan, swift ones like the Assassin, and cheapshot types like the Hunter. Each has a main weapon and a secondary weapon, the same is true for the capabilities. While some are clearly focused on hand-to-hand combat (such as the assassin), others, on the other hand, will only be useful to the opponent (such as the hunter). If they are all interesting in a global way, the character who offers the most tactical possibilities remains undoubtedly the assassin. Equipped with a lasso, this killer can move like a ninja through the levels and thus bamboozle foes by going unnoticed. Conversely, the cooldown is a bit lengthy, which can sometimes be fatal. Nothing very bad. Anyway the game demands mastery, as does Overwatch, (or spamming abilities, also like Overwatch).

The game really comes into itself when you master the moves and you start using the locomotion to outmaneuver opponents. It becomes frantic, chaotic, and violent, but you find that when you get it down there’s a real seamlessness to the motion. These are the moments where Lawbreakers offers a great experience, and I feel with some tweaking the game can build on that capital.

LawBreakers manages to remains very intuitive (any FPS player will find its marks) but it never finds that ‘ah yes’ moment. Its core zero G gameplay is a great selling point on paper, but we don’t see it really fleshed out in the way we want it. It’s a great shooter with great ideas, but we definitely want to see more content.

LawBreakers was reviewed using a PlayStation 4 and PC downloadable code of the game provided by Boss Key Productions. We don’t discuss review scores with publishers or developers prior to the review being published.

Lawbreakers has some rough edges and it’s had a bit of a bumpy launch, but under the issues is a really solid arena FPS that has wacky, chaotic, and fun moments. It could use more players and some tweaking, but it has the makings of an FPS classic.

Review: ATOMEGA
Be the first to comment!
Leave a reply » 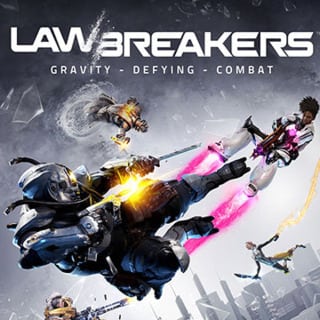