Now more than five years after its original release, Rockstar Games decided to give us a remastered version of one of its most iconic game of the past decade: L.A. Noire. Originally released on Playstation 3 and Xbox 360 (which I’ve reviewed for At7addak.com back in the days) and PC in 2011, the new launch is mainly for those that might’ve missed the original game, and wanted to experience it with updated technology. Themed like a noire film, with the desire to take the concept of the open world on a different road, more focused on the investigation than the pure and hard action, Team Bondi’s original work was amazing for its time. With amazing facial animations which were key to the title’s core gameplay as to be able to deduce your witnesses and criminal’s intentions or lies during investigations.  so that the player can better understand the impact of his lines, during interrogations. So now that I got my hand on a PlayStation 4 copy and Nintendo Switch version, the question is: is L.A. Noire still worth playing nowadays?

As you would expect from most remastered or re-released versions of games, L.A. Noire’s core storyline remains intact and untouched, almost to a point that it is better now with time, when compared to our most recent day’s productions. You see, few games since the initial release of L.A. Noire in 2011 have reached such a level of coherence between its universe and the narrative aspect of it. The player plays the role of Cole Phelps, a former Marines and war hero from the Okinawa battle during the second World War. When he returns to Los Angeles, medals don’t make it is easier for him to get back in the civilian lifestyle, and certainly not his career in the local police. Starting like everyone else as a mere patrol cop, our main character soon will discover by himself that he’s got a talent for investigation work, and starts solving more and more difficult cases. As he advance in his career, Phelps will soon discover that corruption is raging in his beloved city, and that appearances sometimes hide real monsters.

L.A. Noire is an amazing story until this day, with both lead and supporting characters all becoming immediately memorable. Whether these protagonists are Phelps teammates, murder victims, culprits or mere witnesses, they were all treated equally in terms of writing, down to the smallest detail, which reinforces the immersion, so much so that I find myself here replaying this game furiously and eagerly, even after all these years. There’s always a great story progression, pushing you to want to discover more, full of twists that are hard to see coming, and references to other known film noir. Your Femme fatale, late 1940s mobsters, Hollywood crooks, it’s all in there, with a slight dose of comedy, yet keeping a dark tone.

Now I should note that while this is a game clearly created by Rockstar Games, newcomers should be aware that L.A Noire is first and foremost a story to be told at its core, and not an open-world adventure like other titles done by the famed studio. Don’t expect to be grabbing uzis and shooting everything that moves, because this is no GTA.

L.A. Noire in terms of gameplay is an adventure led by police or detective investigation, more than an open world adventure. While the game is based on a fairly large map, it is not governed by the same mechanics as a GTA, to take the most obvious example. You will have the opportunity to travel throughout the city as you see fit, but that will mostly be to go from one key investigation scene to another, with no events on the way to distract you from your goal. Once again, as pointed out above, you are not going to experience the same model as what a Red Dead Redemption or GTA has introduced in the past, but that’s not a bad thing. Investigations are so well packaged that you will never be bored, thanks to the same proven cycle. After a cutscene presenting the facts, you will have to search on ground for clues, which are hinted to you thanks to little audio tunes (or vibrations on your controllers).

You’ll have to collect all these clues, which will be written in your trusty notebook, and help you with you interrogations. And this my friends and future detectives to be is where L.A. Noire shines! The choice of dialogues are relevant, even if we feel that it is still difficult to be wrong, or to launch into the wrong lead, thanks to Team Bondi’s insane work on facial animations, to be able to deduce if the person you’re questioning is lying or not.

Finally, your investigation only ends when you find a culprit. In this third part, you often have are led into a pure action sequences. Sadly, this is where L.A. Noire is not perfect, and unfortunately this remastered version was not an opportunity for Rockstar Games to fix this. Car chases and gun fights are too slow, and not engaging enough, in comparison to other games done by the mighty developer, which funny enough can be completely skipped if you fail them three times in a row. In any case, after handcuffing the one you think is the big bad guy in your case, you’ll get a general score or police report on your performance. If you have called for the wrong culprit and put an innocent goon behind bars, you’ll be able to restart the case from the beginning, which is great for those of you out there that are completionists.

This release of L.A. Noire on Nintendo Switch, was also an opportunity to add some small gameplay features for Rockstar Games. First of all, Joy-cons adds a sort of gyroscopic camera control, as well as the tablet itself uses its touch abilities to help you zoom into clues during investigations. You can also navigate through your notebook with a single finger movement, and even direct Phelps through the screen. All this gives the game a sort of point & click angle to the title, far from being anecdotal because it actually gives an undeniable comfort.

Nevertheless, L.A. Noire cannot hide the fact that it is after all a 5 years and more game. Sure the game will run at full 1080p In dock mode, but the pure technical aspect of the game is still running on old generation technology. There is a hint of aliasing, but mostly framerate drops, and some environmental elements and the scenery tend to load late, creating a clipping noticed during driving sequence. And like it is the case with other titles on the  Nintendo Switch, playing it on the handheld mode fixes these concerns, but you’ll end up swapping these issues with occasional pop-ups and stuttering.

But what about the other console versions? Well, on PlayStation 4 (and Xbox One) L.A. Noire runs at 1080p, while jumping to 4K with HDR support on PlayStation 4 Pro and Xbox One X. Both versions of the Sony and Microsoft console got their shares of upgraded textures, better lighting and additional camera angles for cutscenes, but sadly all locked to 30FPS. Too bad for those of you that hoped for something more dynamic in terms of frame rates, especially when you could probably get up to 60FPS with the specs inside the Xbox One X and PlayStation 4 Pro.

The Xbox One and PlayStation 4 version of L.A. Noire has updated textures and up to 4K HDR support but still reminds us that this is an early 2010 game

As always, I’d like to point that Rockstar Games are just great when it comes to their game’s soundtrack. The latter is actually split into two parts, which are known tunes and real classics from performers such as Bing Crosby, Louis Armstrong or Tex Williams which I’m personally a big fan of, but it’s the other part of the soundtrack that are worth your time. Produced especially for L.A. Noire, and composed by Andrew Hale (who won a BAFTA award for best Original Music), the game’s themes are just marvelous, and some of the singing tracks, performed by Claudia Brücken are fit for this unique setting, and noire mood.

Finally, to end this review, you should know that investing into L.A. Noire nowadays is in general a neat package full of content. The game boast more than 25 cases, which average between an hour or two per case. And that is if you are content to only follow the main story, because L.A. Noire also has a multitude of smaller tasks and quests to finish, plus all previously released DLCs and exclusive console content are now available in these versions.

L.A. Noire was reviewed using a Nintendo Switch and PlayStation 4 retail copy of the game provided by Take-Two Interactive as well as an Xbox 360 copy purchased by the writer. The original game was released in 2011 on Xbox 360, PlayStation 3 and PC is available in both retail and downloadable versions on PlayStation 4 and Xbox One. We don’t discuss review scores with publishers or developers prior to the review being published.

• One of the best written story in gaming
• Amazing acting that is almost perfectly rendered thanks to the motion scan technology
• The whole investigations and interrogations gameplay mechanics
• Decent port on the Nintendo Switch
• Updated visuals on the Xbox One and PlayStation 4.

• The game still has issues of that era such as aliasing, low display distance and framerate drops.
• Mandatory extra storage need on Nintendo Switch with MicroSD
• The city feels empty in comparison to modern open-world games
• Not enough incentives for fans to return to the game except nostalgia

If you are someone that never played L.A. Noire back in 2011, then you shouldn't miss this remastered version of Rockstar Games' detective storytelling adventure. With the choice to play it on the go with fun Nintendo Switch gameplay mechanics, or see it with upgraded textures and up to 4K resolutions on Xbox One X and PlayStation 4 Pro, it would be a shame for any player to miss this iconic game... Now can we please have a remastered Bully, pretty please? 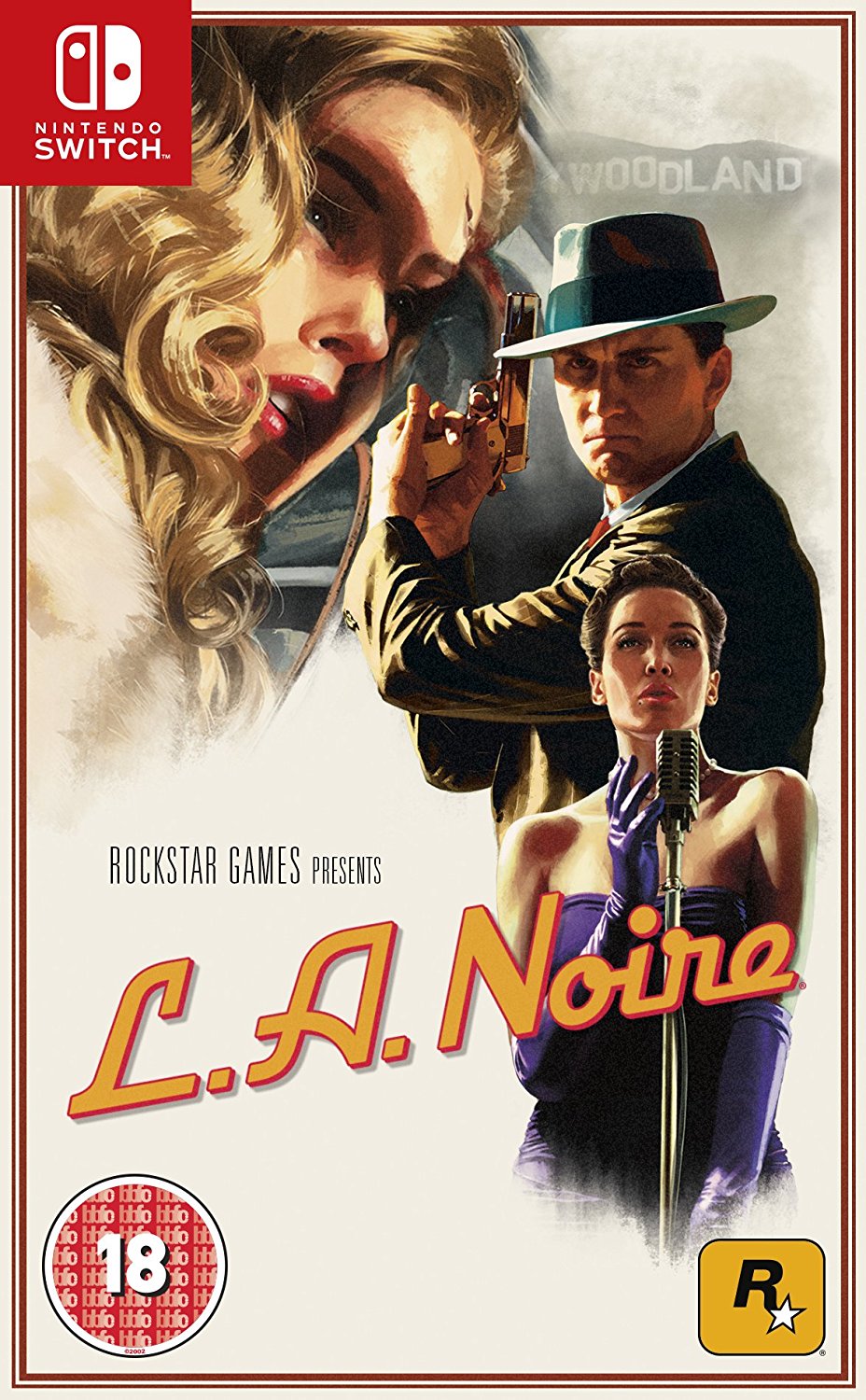