RPGs are probably the biggest genre in single-player gaming, and while FPS and third person action aren’t as prolific these days, people are always up for a good RPG. The thing is, however, most Western RPGs are set in the fantasy world. Someone got the idea to crib Tolkien way back when and we’ve just been rocking it this whole time. Enter Kingdom Come: Deliverance, a medieval RPG style that wants to get as close as possible to a simulation of the Middle Ages. The game sets out with the goal of using realistic mechanics in its quest to create as faithful as possible a recreation of life at this time with its rules, its customs and its conflicts.

This is no small order. While there are lots of games that showcase the past with stunning historical accuracy, most of them are grand strategy or RTS titles. If it features riding a sword and stabbing dudes, it’s usually Tolkien fare. But Kingdom Come: Deliverance’s Warhorse Studios is out to do the deed without any of the usual fantasy monsters and magic. While there have been titles like one of my all-time favorites Mount & Blade, they’ve still retained elements of strategy and world management/simulation.

Kingdom Come: Deliverance is basically aiming for that niche market of gamers that are super into history but also like hacky slashy RPG titles.The game really commits to its setting, but the even more surprising part is how committed it is to avoiding anachronisms. The story is interwoven with several real-life events involving the Holy Roman Empire and the notable rulers of the time. While your story is fictional, it intersects with real events a la Assassin’s Creed. You have choices and twists and turns, but the main events stay the same.

It’s a game that really puts a lot of legwork into establishing its setting and storyline, and as a result there’s a lot to follow. Be ready to watch dozens of cutscenes and retain a slew of historical characters. The whole is accompanied by an excellent soundtrack to the medieval sounds too, a sound dressing that does not hesitate to regularly fade to let talk atmospheric sounds.

The kingdom that Henry will explore in his new role as Knight in the service of Radzig will be to find the killer of his parents and the sword forged by his father. The aim of the game is not to put ourselves in the shoes of the classic archetype of the role-playing hero, but of a pretty average young fella living in the heart of Bohemia in the 15th century (in 1403 to be exact).

For those of you who aren’t familiar with medieval history, Bohemia was a historic region of Central Europe (we know it as the Czech Republic). People often think of the history of Europe after the fall of the Roman Empire as being ‘The Dark Ages’, but the medieval world was anything but, as it witnessed many significant historical developments. It was, however, a constantly shifting ecosystem of alliances and wars. It is in this rich and complex historical context of political intrigue that Kingdom Come: Deliverance unfolds its context. The player necessarily incarnates Henry, son of blacksmith whose family is massacred by an assault of bandits led by Sigismund, the half-brother of the Emperor of the Holy Roman Empire. The monarch is a bastard who did not hesitate to kidnap his brother to get his hands on all the riches of the country. Kingdom Come: Deliverance is based in this sense on the history of revenge our character certainly imposed, but the evolution will remain completely free over our actions, our deeds as well as our misdeeds. Do not expect to face armies alone or become the absolute regent of the area since Kingdom Come: Deliverance would rather look like a less believable take on classic warfare.

After a long introduction of more than two hours of play where our fortune hero twice escapes death and is robbed of the sword forged by his father, the real Kingdom Come: Deliverance adventure begins on the outskirts of the city of Rattay, the shadow of the castle of Radzig. Impressed by Henry’s determination, the local lord decides to take the young man under his wing and has him a place among the city guard. A situation not very realistic in the hierarchical and social context of the time, but rather well brought about by the scripting of Kingdom Come: Deliverance. Do not expect, however, to parade in your armor brand new knight armed with a powerful sword metal glitter. The guard’s hole contains only a metal helmet accompanied by a wooden club. In short, it is the hard way that begins your real journey.

The map of Kingdom Come: Deliverance opens then on several possibilities for our young orphan guard: to improve his handling of the sword and of the arc, interact with various NPCs to accept one of the few secondary missions of the game or to wander freely through paths and forests in search of a potential adventure. Any action will find its usefulness in the progression of one or the other game mechanics. The menus of Kingdom Come: Deliverance overflow (probably even a little too much) with information, sections and subsections to the point of turning to the simulation when one plunges for good the nose inside. There is an ability to improve for almost all elements of gameplay: speech, combat, drinking, reading, everything here is done to immerse the player in a universe credible to tightly interlocking mechanics. This is something we don’t see often enough in RPGs, which have become first and foremost about the combat; you really are role-playing

The whole game is punctuated by a very precise day-night cycle, with shops open at certain times or non-player characters that can be met in different places different times, simulating their real existence in Kingdom Come: Deliverance. You must eat at regular intervals (but not too much to avoid suffering a penalty), sleep to maintain good stamina and even wash yourself at the risk of seriously reducing your chances of survival. social interactions with the bourgeoisie because of your bad smell. The chances of going unnoticed through infiltration are also affected by the type of clothing worn by Henry. Heavy armor will make you slower and above all noisier, while a lighter and if possible darker outfit will always be the best option to play it off. Be careful, however, the reactions of the population when you frolic while dressed in black leather, since this kind of accoutrement will make you suspicious in society. The map of the game is quite large, open, but all likewise divided into a dozen zones of interest between which the player will have a hard time finding a really original activity. The expanses are realistic, the vegetation bushy, but the whole is still a bit empty (although the Day One patch seems to have added some new random events).

Apart from a few sanctuaries and points of interest, which are pretexts for a short history lesson, the Bohemian Kingdom is made up of a series of rural villages and medium-sized towns governed by various local lords. Bucolic and relaxing (when you do not come face to face with a troop of thugs), exploration is facilitated by a rapid travel system and the ability to travel on horseback.

Count about forty hours to come at the end of the main plot of the title, and add in a good twenty if you are the type to want to complete everything. Despite the lack of personalization of the hero, Kingdom Come: Deliverance’s progression system is totally free and works according to the old adage “it is by forging that one becomes a blacksmith”. Run to increase your vitality, fight with the sword to perfect yourself in the discipline and collect plants to become an expert in herbalism. Each skill, from the most useful to the most secondary at first sight progresses according to this scheme and opens new possibilities of dialogues and actions. Every quest the title offers many methods of resolution, from the bloodiest to the most peaceful. There is no fixed class in Kingdom Come: Deliverance, just as there is no limit to the possibilities available to achieve your goals. Before being a brave warrior, Henry must first of all handle the delicate art of collecting clues in these medieval times troubled by conflict. As we interact with NPCs, we have several options: to coax them, to charm them, to convince them, to help them, to threaten them, even to kill them

Two game systems are particularly frustrating: saving and inventory. Kingdom Come: Deliverance’s save system is based around checkpoints and saving in specified locations or with the save item, which is basically booze. I respect how creative it is and how much it raises the stakes, but I’d be lying if I said it didn’t frustrate me. Yet on the whole Kingdom Come: Deliverance sets out with kind of a strange goal, but I’d argue it pulls it off. If you wanna feel like a Bohemian Knight, it’s a solid way.

Kingdom Come: Deliverance was reviewed using an PlayStation 4 digital download code of the game provided by Deep Silver. The game is also available on Xbox One and PC via Steam in digital and retail releases. We don’t discuss review scores with publishers or developers prior to the review being published

A cross between a history book and a hack-and-slash RPG, Kingdom Come: Deliverance sets out to make a medieval themed game that is as historically accurate as humanly possible. It commits to the RPG system by offering roleplaying and not just combat with bits of dialogue sprinkled in, and it really immerses you in its setting. It has some rough edges but these shouldn’t distract from what is fundamentally a great game experience. 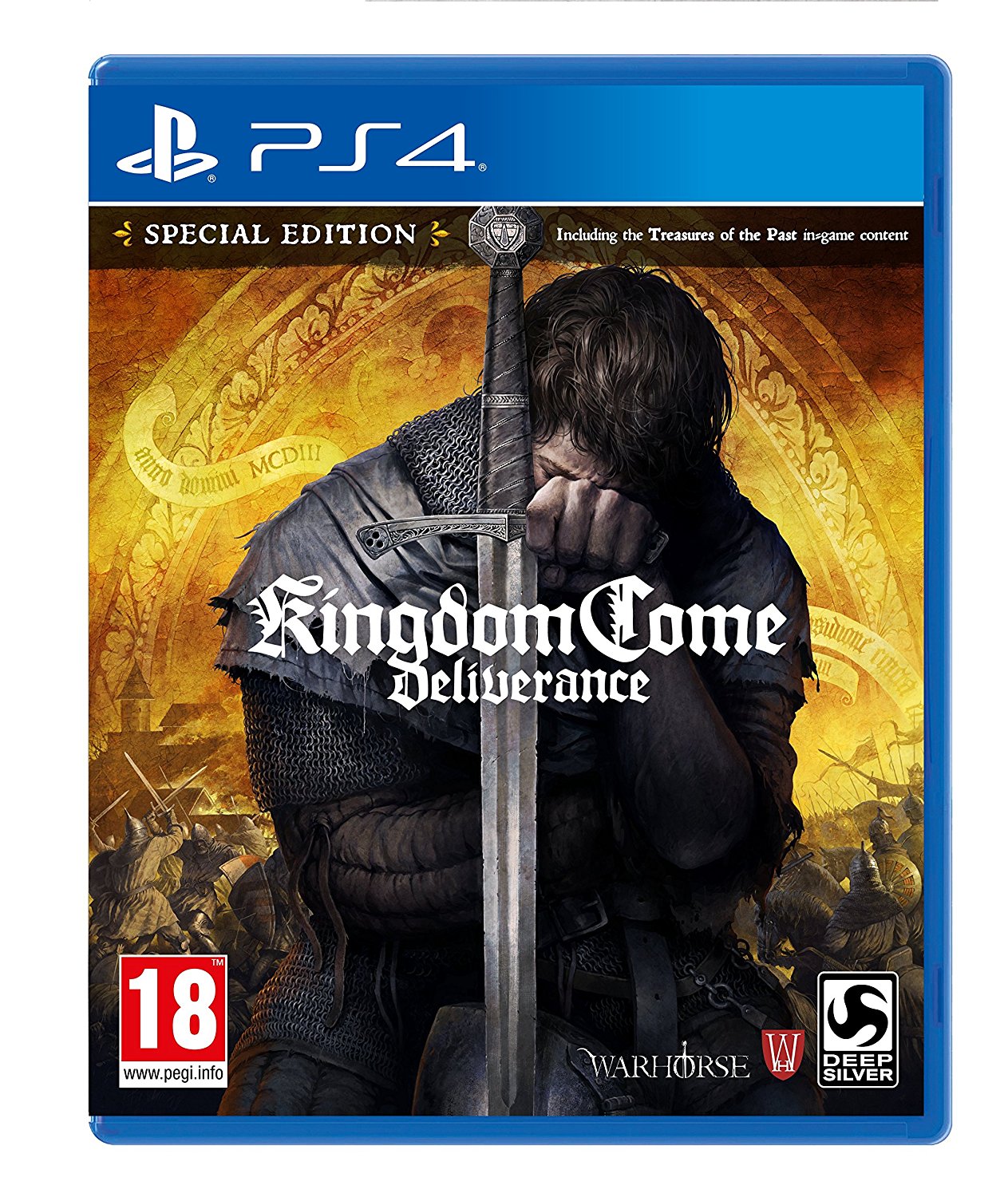