Top-down shooters often come in the arcade variety, but sometimes you get top-down shooters that introduce sprawling levels with objectives and challenges. This type of gameplay doesn’t really pop up that often, so I’m always excited to see a title in that style. JYDGE puts you in the shoes of a grizzled cop in a cyberpunk world that has to take on criminals and rebels before exposing a dark conspiracy (hint: it has to do with the people he’s working for)

JYDGE is actually set in the world of Neon Chrome, making it probably one of the only cases I can recall where two indie games share a game universe. In the case of JYDGE, you’re in the crime-ridden town of Edenbyrg, and as a jydge you need to clean up the town. Oh, I should mention: the game replaces all the instances of the letter u with the letter y. I’m not entirely sure but they had me reading y as u by the end of it, so kudos.

In any event, each level of the game takes place in a large area that you view in top-down mode. You need to dispatch the bad guys and fulfill one or two side objectives. The game gives you a handful of approaches for taking down the bad guys. You can sneak around and shoot them through windows, or you can shoot it out with them Wild West style. The game makes shootouts fairly challenging, so it’s in your interest to try and sneak around a bit before unleashing the whoop-ass.

The game manages to switch things up by making the side missions fairly difficult but still very doable. Can you complete the level without being caught? Can you do it in 40 seconds? This part of the game ended up being very involving for me, because I found myself having to constantly use different techniques and weapons to shave seconds off my score like a speedrunner

Speaking of techniques and weapons, Jydge has a veritable arsenal of weapons to choose from. The upgrades are actually kinda pricey, and you have to save up for the nicer ones, so you learn to manage your cash. When I started up on the first few levels of the game, I ended up dropping cash on every weapon I could. I learned later that it was smarter to pick a solid weapon and just upgrade damage. I ended up getting a laser weapon, and then getting this buff that let me get health from kills. You also have heavy specials, and a lot of stat boosts that help you get around.

At its core though, JYDGE is a very simple game. It is incredibly indie, from its visuals to its voice acting, and it doesn’t really offer much in terms of aesthetic or atmosphere. What it does manage to do is provide a solid arcade experience with a surprising amount of depth

JYDGE was reviewed using a PC downloadable code of the game provided by 10 Tons. The review was tested on a PC running Windows 10, with an 8GB NVIDIA Geforce GTX 1070 fitted on a 4th Generation Intel i7 4790 3.6Ghz CPU and topped with 16GB of RAM. The game is also available on Xbox One, PlayStation 4 and Nintendo Switch via digital store releases. We don’t discuss review scores with publishers or developers prior to the review being published.

• Visuals are fairly basic
• Some levels feel a little repetitive

JYDGE is a simple shooter that offers complexity by giving you multiple ways to complete a mission and a massive arsenal of weapons. It may not be that creative, but it’s a solid top-down shooter experience. 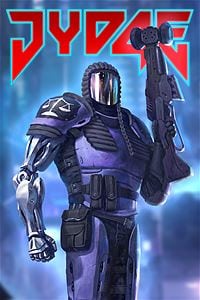