Review: Into the Breach

I’m not generally up for turn-based games, and I’m not much for strategy, but when I saw Subset Games’ new title Into the Breach, I decided to step out of my comfort zone. For those of you that don’t know Subset games, they’re the smart fellas who put together the incredible FTL (Faster than Light). FTL was a clever little space exploration title where you roamed the cosmos and fought other ships in turn-based tactical combat. The game was amazing because of how simple it was, yet how complex it managed to be.  Can Subset games manage to pull that off again?

Well, in a word, yes. Into the Breach starts off fairly simple but it quickly turns into an involving game that forces you to very carefully evaluate your every move. Let’s start with the concept of the game. While FTL took you on a kind of lonely, quiet space adventure, Into the Breach starts off as a straight-up downer. The game launches and you’ve already lost. Game over, the world ended. But it’s not all over; you’re sent back in time to try and take on the Vek, a powerful insectoid race, and stop them from taking over the planet. It’s a clever framing device for the whole ‘lose, dies, try again’ loop but beyond that, it makes the game very grim. Even when you enter the fight, the world is clinging to its remaining forces and trying to survive, and victories are less triumphant and more relieving. And throughout the game, you learn to accept a loss.

You take on the Vek in a number of levels, and in each level, the idea is pretty simple. You have three mechs, and you need to move your mechs around and attack the Vek. You can move on the grid, and you get one attack per mech (that changes later but more on that). It’s very much like chess in a way, in that each unit can move in a specific way and can only attack in specific directions or configurations. Now where it really heats up is the pushing. Every time you attack something/someone, the victim is pushed back a square. Anything behind whoever is being pushed takes damage. And so on and so forth.

The game really revolves around very carefully planning out your limited moves to optimally take out the Vek. Additionally, you don’t always need to kill them; sometimes you just need to survive. Many of the Vek units just attack the square right next to them. If you move them, they’ll just attack nothing or get blocked. It gets even more complex when you factor in the fact that Vek units will attack anything in their path, which means it’s really easy to get them to attack one another. On top of that certain tiles will damage units after one turn. There are lots of different ways to take out enemies, and the game forces you to be as efficient as possible. They’ll almost always outnumber you, so you need to make one or two hits take out three or four of them. And when it works it’s amazing.

After a certain number of rounds, the Vek will retreat and you can enjoy a nice win. Each level has bonus objectives to complete like protecting a certain building or not killing one of the Vek units, and you get valuable upgrade points if you complete the objective. The game really does turn into chess in this sense, because every move is calculated carefully. It’s tricky to line up nice moves, but at the same time it’s not really that complicated, so it never feels like it’s over your head. You figure you just need to think your moves through. And that’s what makes the game so addictive; you keep thinking ‘okay well what if I did this’.

I found myself sitting and plotting out my moves with a ton of precision and attention to detail because I wanted to win and I wanted a nice clean win. Your battlegrounds are populated civilian areas, and every time a building is hit you run the risk of losing power. Lose enough power and the game ends. The speed with which everything can go down the drain if you’re not careful, and it totally reminds me of FTL. But going back to the game’s storyline and theme, this tiny little-pixelated town you’re defending feels surprisingly real. When a building gets hit you get a notification that a couple hundred people just perished. It’s actually a worrying thought because you really get invested in protecting these people. It’s really remarkable how a small studio like Subset can tell a story with a small pixelated board and no voice actors.

The game has a lot to offer beyond your first playthrough, as you can later unlock different mechs and abilities. You get new abilities for completing secondary objectives, and then you can swap out your loadout in between levels. Of course, you need to make sure your mech has enough power for your new upgrades (FTL, is that you?). The trickier part is getting new mechs, which you unlock after working your ass off to get achievements. The new mechs are worth it though. They have awesome abilities like flaming shots, firing through walls, massive tanky mechs, mechs that can lob aerial bombs, the whole nine.  The unlocks really do shift the playstyle around, as you change up your whole game to take advantage of the new abilities (and inherent weaknesses) of your unlocked mechs.

Into the Breach is another great game from Subset games, and I think it’s an awesome example of how amazing a strategy game can be if it’s distilled to a pure form and basically turned into a board game of sorts. It’s a great title and it’ll appeal to casual fans as well as the more discerning hobbyists.

Into the Breach was reviewed using a PC digital downloadable code of the game provided by Subset Games. The review was tested on a PC running Windows 10, with an 8GB NVIDIA Geforce GTX 1070 fitted on a 4th Generation Intel i7 4790 3.6Ghz CPU and topped with 16GB of RAM. We don’t discuss review scores with publishers or developers prior to the review being published (click here for more information about our review policy).

Into the Breach is a simple yet engaging strategy title that pushes you to carefully consider every move, and makes victory seem that much more rewarding as a result. It’s quite an addictive title, and expect to spend quite a bit of time mastering it and feeling like you might be able to eke out a victory in the great war between man and insect. 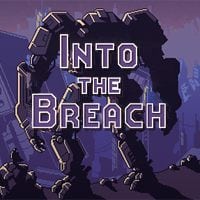