Review: I fell from Grace

Games still struggle for relevance in the global media market just like any other form of media, and while some developers choose to make their games bigger, badder, and louder, others go in a different direction and try to make something more artistic. This means that games will often target storylines that are heavier, bringing in themes that are more typically adult

This is where I fell from Grace comes in. It’s a 2D adventure game with pixel art that takes you on a journey in which you confront death, disease, and even the supernatural. The game’s format is mostly sidescrolling, with your protagonist going from area to area and collecting items and information. kinda like a point-and-click adventure title, but with buttons

I fell from Grace’s storyline is pretty heavy. The main character, Henry, struggles to deal with his wife’s poor health, and he tries to find a way to help her out. In the meantime, he deals with the typical struggles of life. I Fell from Grace spends a lot of time dwelling on heavier themes like existential dread and depression, and it ends up paying off, because the narrative is pretty gripping.

The game takes on horror aspects with some of Henry’s visions and nightmares, but by and large it’s a game that derives most of its horror from the day-to-day life that Henry faces. I fell from Grace is a game that really pushes you to think about things, and I think the storyline does a good job of making us feel for Henry. Dialogue could use some work, as I felt in a lot of senses it was tacky or overwritten. Good dialogue flows more naturally, and the characters in I Fell from Grace don’t really have that vibe.

I fell from Grace does do pretty well for itself in terms of visuals and music, with a well-designed soundtrack that’s intense while also being smooth. The pixel art is terrific as well, and the game’s environments seem to show a lot of detail.

In terms of settings, I Fell From Grace sees you moving through a number of different locations, including at Henry’s home, at his work, and downtown. There’s a lot to see and do, and you’ll need to be as thorough as possible. Dialogue is essential, so it’s too bad if you find the dialogue tacky, considering it’s going to have most of the key information in I fell from Grace.

The main issue with I Fell From Grace is arguably that it tries too hard to set itself apart from other games, to the point where it doesn’t really have a quest structure or any kind of guide. I get that this is how games in the 90’s did things, but honestly it’s not something I want to keep having in my games. Minimal direction is cool, but when you overdo it you get a game that’s just a ton of backtracking and aimless wandering, which isn’t very fun.

It’s a classic case of a good storyline marred by questionable design choices and writing that doesn’t always quite hit the mark. However, I Fell From Grace still managed to have a real effect on me, and I feel that as a game, it was a fairly intense experience that really made me scratch my head at times. It manages to be heavy without being too depressing, thought-provoking without being too pretentious, and existential without being too philosophical. I won’t give away the ending, but I will say there’s a real payoff there, and if you’re willing to overlook the rough edges, you’ll enjoy I fell from Grace for what it is. A flawed, yet emotional story.

I fell from Grace was reviewed using a PC downloadable code of the game provided by Deep Taiga. The review was tested on a PC running Windows 10, with an 8GB NVIDIA Geforce GTX 1070 fitted on a 4th Generation Intel i7 4790 3.6Ghz CPU and topped with 16GB of RAM. We don’t discuss review scores with publishers or developers prior to the review being published.

• Lack of quest structure is frustrating
• Some dialogue is tacky

I fell from Grace has a lot of rough edges that need sanding down, but underneath the indie game loose hairs lies a compelling storyline that really managed to get me to think. It’s a title that puts the player in uncomfortable positions, but you end up wiser for it 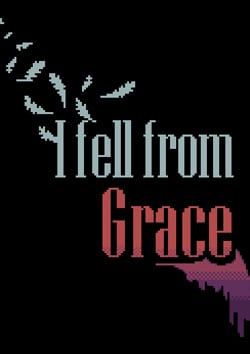