When it comes to physics based games, there’s been a plethora of releases throughout the years, ranging from strange concepts like Goat Simulators, or even Gang Beast, but lone developer Tomas Sakalauskas had another thing in mind with Human: Fall Flat than just creating a goofy title. A game mixing a singleplayer and co-op puzzle experience results in a fun addition to your Nintendo Switch if you haven’t tried it on the previous platform releases.

Human: Fall Flat offers a truly atypical experience, as we plays as Bob, a jelly wobbling character with a cap, who gets lost in over 8 different environments full of puzzles to solves. You’ll quickly tame the gameplay through a well-done tutorial that teaches us to move, interact with objects, and climb the best we can (the latter will actually test your patience).

The peculiarity of Bob is that his two arms are independent in terms of gameplay mechanics in Human: Fall Flat. By pressing for example the left trigger, the corresponding arm of our engineer gets up and can then grab, press or automatically clings to objects in its path. From then on, it’s a whole game of coordination that is set up and offers many puzzles and situations often hilarious. But here it is, this slow-paced, low-polygon puzzle epic runs out of steam over the course of couple of levels, although they gain in intensity and complexity.

If the first puzzles will just ask you to climb and activate buttons, where your camera angle will define the orientation of Bob’s arms, it is important to specify that you will eventually get into more tedious and physical challenges. These are more elaborate and will sometimes give you a hard time for a few minutes, where observation and hazardous attempts will be required until you find a solution. Unfortunately, these stages of wandering and hesitation will quickly annoy you, especially with impossibility of running, an embarrassing constraint when you explore a large stage with several elements to use. Cranks, buttons, vehicles with erratic behavior, but saying that Human: Fall Flat does not change and innovate throughout its adventure would be a crime. The 5 to 7 hours required to complete the adventure follow a logical progression that will put your nerves and imagination to the test, despite this little concern for rhythm.

Among the other flaws of the title, the camera which, in certain situations, is placed directly behind Bob’s head can disturbs the legibility of the environment, sometimes leading to an undeserved death. ANother issue dear to me is that, while I understand the urge of simplifying everything with an ultra-minimalist art direction, a lack of soundtrack is a bit weird. After all, we’re not here for that and the player is already taking full eyes watching Bob act like a disarticulated engineer trying to sort out his problems.

Where Human: Fall Flat is strong though is in its co-op aspect. By pressing a key on another joy-con controller, a second player can take part in the adventure, transforming the game in split screen mode. The riddles remain the same but adapt very well to the two-player cooperation. Moreover, in addition to delivering simply hilarious moments, the riddles in a way become more difficult because you need to manage your friend.

Human: Fall Flat was reviewed using a Nintendo Switch downloadable code provided by Curve Digital. The original game was released in 2016 on PC, followed by PlayStation 4 and Xbox One release in digital releases in 2017. We don’t discuss review scores with publishers or developers prior to the review being published.

• Not fun to be played alone
• A little too slow rhythm wise
• Some camera and checkpoint problems
• What's with the lack of soundtrack?

Human: Fall Flat is original in its concept and frankly funny for a few hours, but runs out steam unless you have a friend to rely on.

An accomplished, award-winning gaming professional with more than 12 years of experience in the videogame industry, Nazih Fares has worked in public relations, marketing, eSports and localization for over 14 different publishers and more than 90 global brands. Fares is currently MENA Communications Manager at Blizzard Entertainment, based in The Hague. His views on this site are his own, and not those of his employer.
More Goodness
Curve DigitalMultiplatformMultiplayerphysics based puzzle game

Review: HUE
Be the first to comment!
Leave a reply » 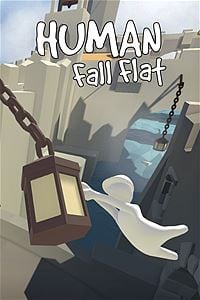