Whenever a publisher launches a licensed game based on a movie, instinctively we know that there is a lot of chance that it is going to be a gamble. Think about it for a moment: E.T.? Superman 64? How about Dragon Ball Evolution? But then again you have some really good ones like The Lord of the Rings: The Return of the King or Mad Max more recently. Sadly, Sony Pictures Animation and Bandai Hotel Transylvania 3: Monsters Overboard is not the latter case, a really bad adaptation based on an already mediocre movie of the same name… I also blame Adam Sandler, he’s not the same actor he used to be.

Don’t get me wrong, I’m not the kind of person that judge games by their covers in any way, but my first 30 seconds, in the game alone were enough. The cinematic intro is a series of still images animated like a Powerpoint presentation, before tossing you to the midst of the action, where Dracula and his daughter are stranded on an island after a storm hit their cruise ship. It does not follow the main script of the film, but an entirely different story where Dracula will need to save all his monster friends with the help of his daughter, as well as strange little creatures known as Impa who are native to the island.

In any case, when I assumed the budget was reduced on the animated cutscene, I turned out that I was wrong, as the entire game’s engine seems to have suffered as well. The game’s characters are moving like some pre-2000 presets, where even the PS2 generation era of platforming or adventure games had smoother animations. If you do pass through these first minutes of gameplay, then you’re in for a strange discovery: the game is a Pikmin sort of clone. Taking the basics of Shigeru Miyamoto’s gameplay, Hotel Transylvania 3: Monsters Overboard is actually fairly easy to understand, with more simplified mechanics. The manoeuvrability will take a bit to get used to, and I’ve realized as well that the game only supports Joy-con, so there’s no alternative control scheme like a Nintendo Switch Controller Pro.

Like with Pikmin, your main character will be able to send orders and manage a small horde of critters known as Impa. You can toss them at enemies to attack them, shout at them to retreat them from the action, charge at obstacles or even carry items for you. The similarity with Pikmin goes as far with the way the Impas are categorized, each with its own abilities, including the Frankenimpa, Wolfimpa and other varieties. Each of these different Impas is in a way unlocked once you save a key character from the cast of Hotel Transylvania or Drac’s Pack, such as Frankenstein, Murray the mummy, and Wayne the werewolf. But in any case, most of the puzzles in the game are rather basic, and won’t be a challenge to the veteran Pikmin player in you.

Here and there, there will be treasure chests that will need to be unlocked intelligently to buy upgrades for your Impas or other skills. The game stands out from its source of inspiration on a lot of points, which could be a good idea if only the game had been designed with a little more technical ambition. It’s a bit sad considering that Outright Games also did the pretty decent Adventure Time: Pirates of the Enchiridion (which we reviewed a while ago on the site), and the latter is nowhere near outdated as this title. Maybe it was rushed? Or maybe that was just a business decision to make use of the movie licence no matter what? Who knows, but is clear is that this game is clearly in need of more development time, especially given the fact that it wasn’t even marketed.

Hotel Transylvania 3: Monsters Overboard was reviewed using a Nintendo Switch digital download code of the game provided by Bandai Namco. The game is also available on Xbox One, PlayStation 4 and PC via digital store releases. We don’t discuss review scores with publishers or developers prior to the review being published (click here for more information about our review policy).

A game adaptation of the movie with the same name, Hotel Transylvania 3: Monsters Overboard is a Pikmin clone that is too outdated to be recommended to anyone on any platform. 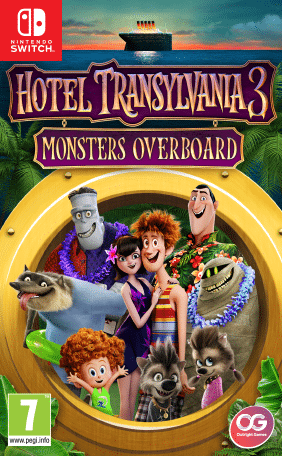