Even if you don’t know a thing about anime, you likely recognize Gundam. The seminal anime series basically pioneered the giant robot fighting genre we know today. Gundam showed giant robots fighting, but they were stylish, smooth, and basically just giant metal samurai. As such, any game that features Gundams really needs to embody that spirit of giant robots that are as destructive as they are swift.

The first thing I should note is that Gundam Versus is a very typically Japanese game. It’s an online battle arena game, and you square off in 2v2 and 3v3 matches in big, open spaces. The physics, the combat, and the motion are reminiscent of Japanese arcade staples like Dissidia and Versus, and so if you go for that sort of thing you’ll definitely be in for a treat.

Unfortunately the devs manage to make Gundam Versus a game about giant robots bashing each other start surprisingly slowly. You get a painstakingly long tutorial to slog through, and every last aspect of the game is explained in excruciating detail. It’s not totally useless, considering the Gundam Versus’ mechanics take some learning, but it is nowhere near that difficult to work the game out.

Either way, after sitting through the super long tutorial, you jump in and then it’s battle time. Stick to the online, as the single player is as dull as it gets. You can try it if you wanna get a sense of the gameplay, but realistically you’ll have much more fun in the online mode. 2v2 feels like the sweet spot. The main challenge in Gundam Versus is mixing up your attacks and learning when to use ranged weapons to hurt enemies from a distance and when to get up close and personal. The complexity of Gundam lies in its Dota-like roster, and you’re really gonna wanna get through the roster and get a sense of the different robots.

Battles can start off a little slowly as the opponents feel out the space, but they quickly turn very dynamic and intense, with people jumping, dashing and zipping around while filling up their boost gauges. When you really get it down, you quickly switch it up, starting with a remote attack,  one or two melees, switching to guard and then getting out and keeping a lock on your enemy. It really gets fun with special attacks: big rockets, demonic laser beams and ultimate saber combos! Each robot obviously has its own specificities and attacks, ranging from the big defensive tanks to the super-fast and dangerous Gundam melee. To balance the whole, the duels are played on a base of 6000 points. Feel free to choose an ultra-powerful fighter with devastating attacks worth 3000, but you will then only have two lives in the duel. On the other hand, if you take a poor Gundam equipped with just 1000 points, the fight will be more difficult, but you will have many more spare robots on hand!

If the final result might suggest a frenetic 3D action game, the overall mechanics of these clashes are very close to those that can be found in a fighting game: anticipate the moves of your opponent, anticipate the counters, and act consequently. This type of brawling is the main basis of the title. On the whole, however, Gundam Versus doesn’t seem to have much to help it stand out as a versus game. This is a problem in later levels, where you find that your battles follow a lot of the same patterns.

Gundam Versus was reviewed using a PlayStation 4 downloadable code of the game provided by Namco Bandai. We don’t discuss review scores with publishers or developers prior to the review being published.

• Single player is very dull
• Too much grinding for unlocks

You can’t go wrong with giant robots, and Gundam Versus shows us just how fun the buggers can be. It’s a solid arena fighter that can quickly turn chaotic, and it’s great fun for fans of Japanese-style arena action titles. Some parts are repetitive, and there’s a fair bit of grinding, but it’s a pretty underrated fighter. 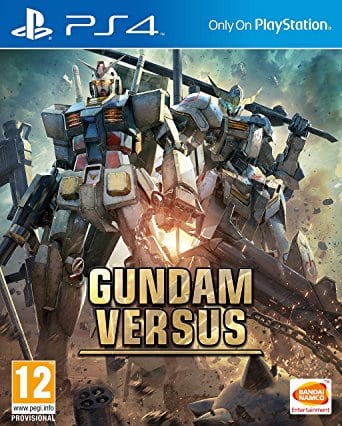