After a great start on iOS and Android mobile devices, Eden Games have finally decided to jump to more serious endeavour with their Gear.Club racing game franchise. Available in early December on Nintendo Switch, Gear.Club Unlimited is the chance for Eden Games to get back to the serious business, reminding every one of their old legacy as one of Atari’s key developer, and makers of really iconic games like V-Rally, Kya: Dark Lineage and the last Alone in the Dark.

While most games on Nintendo Switch in the past couple of month have been mostly ports of other platforms, or even remastered versions of previously released titles, some independent studio are jumping on the hype of the machine itself. For Eden Games, the plan is actually to be the first proper racing game for the Nintendo Switch, promising a large-scale driving experience, with realistic looking cars and an almost endless amount of circuits, but by base it is the same concept and recipe of the iOS and Android Gear.Club.

Nevertheless, repeating what worked for Eden Games on mobile devices is quite logical, especially considering the rather close specs of the Nintendo Switch with today’s high-end smartphones and tablets. The game basically invites you in a sort of large-scale world where you will race through different circuits, to unlock higher car classes and compete in more challenging races. This world is a mishmash of numerous known regions, with a variety ranging from desert roads the likes of Route 66, under the snow of an imposing mountain range like the Alps or in the green valleys of a rural Italian rural .

While the variety in circuits is large enough, over 200 tracks that leads to more than 430 races, the game sadly has a small amount of just 30 vehicles. Nevertheless, these cars are from 16 official manufacturers which are the like of BMW, Chevrolet but also supercars like Pagani and McLarens. Throughout the game, you’ll be able to fully customize and improve your car with the workshop, ranging from the engine, transmission or brakes, which could turn your starting car – a Nissan 370Z in my case – into a roaring beast without the need of buying a new set of wheels. You will also be able to add visual customizations to your cars, but those are limited to couple of option, namely changing the paint job, adding some spoilers, which sadly don’t really change much in the stats of your case… Anyway, the game’s customization system is a mainly a mix of arcade and simulation, and this wealth of content is actually surprising for a game primarily aimed to Nintendo Switch players.

My favorite part of the game actually is the workshop. As stated above, this is the place to upgrade and customize your game, but instead of being just an in-game interface with a bunch of options, Eden Game decided to add a bit of simulation management mechanics to it. You see, your workshop is a big blank canvas, which you can also customize the way you want, by placing each new workshop station as you like on a set of placement locations, once you unlock them. Adding to it a plethora of visual and cosmetic little items, you’ll be able to build the workshop of your dream, fit for any asphalt burning lover. A great little touch, which in a way reminds me of the good ol’ Test Drive Unlimited, which was also produced by Eden Games and launched in 2007.

Gameplay wise, Gear.Club Unlimited does it really well, balancing the arcade and simulation racing styles. The title reproduce greatly the sensation of speed, which evolves significantly when you reach the higher vehicle classes and get access to the beast of cars like the Ruf CTR3. Each of the cars has by base its own play style, with some better suited for sharp turns, while other handle better long straight sprints. And you’ll need to understand all this because in comparison to other casual mobile games, the tracks are very well designed, giving you all sorts of challenges, the likes of big AAA racing game productions.

On top of that, Gear.Club also sports a great diversity in game modes, not opting for just asphalt racing, but adding as well a sort of rally mode. Once again, don’t expect a Dirt Rally, but the essence is there, where you’ll be limited to pick between very few cars and race on dirt roads, as you learn to manage your braking pace, car weight and accelerations. The end result is quite convincing even by playing just in handheld mode, and will help appeal to all kind of racers.

When it comes to the technical part of the game, I think the best to explain it is to call it a fair job. Graphically speaking, vehicle modeling are quite nicely done with some slick light work on the reflection, but there’s not much else to be wowed by. The environment around the circuit is close to the early PlayStation 3 days, with crude texture, noticeable pixels in the foliage and lacking any sort of life. Don’t get me wrong, I’m not expecting a lifelike and animated track like Forza Horizon 3 with birds flying around, and crowd cheering, but it’s a shame this wasn’t upgraded even a tiny bit. Nevertheless, the game runs rather smoothly, with no stutter or framerate drops, and it’s pretty decent to look at in both handheld and TV dock mode.

So what about multiplayer? Well, like other Nintendo Switch games, Eden Games went ahead and made use of the portability of the new console, by adding a 4-player splitscreen mode. I wouldn’t recommend going that high in terms of player count on handheld mode unless you really want to squint your eyes hard, but it looks great on TV mode. For those of you that aren’t into traditional couch-style multiplayer, Gear.Club Unlimited sports an online league, accessible from the singleplayer campaign mode, where you will race for against ghost racers, and hope to reach the top of the leaderboard every day, in hope to reach a better promotion and level to boost your credit reward.

Finally while I don’t like usually to end my review on a negative note, I got to point out on two different things that got annoyed me, especially for a racing game. First of them is the lack of any sort of replay feature… I mean it’s 2017 people, the least we can do is to get a post race replay option, especially considering the Nintendo Switch now can record gameplay (at least if the developer choose to activate the function). My second issue is a bit more important for me, and might not matter for you: the soundtrack, or rather the lack of it. While the rest of the game is presented quite nicely, and the audio effects of the cars are pretty close to their real-life counterparts, I don’t get why there’s no music in the menus, or any sort of soundtrack during races.

Gear.Club Unlimited was reviewed using a Nintendo Switch downloadable code of the game provided by Eden Games. We don’t discuss review scores with publishers or developers prior to the review being published.

• Outdated textures and visuals
• No soundtrack?
• No race replay function
• Not enough cars

Gear.Club Unlimited is a worthy racing game pick for the Nintendo Switch, and a great comeback of veteran studio Eden Games. While you should expect a title as demanding visually as Forza, the game is a perfect balance of both arcade and racing simulations, with a wealth of content that will keep you busy for a long time.

Review: Forza Motorsport 7
Be the first to comment!
Leave a reply » 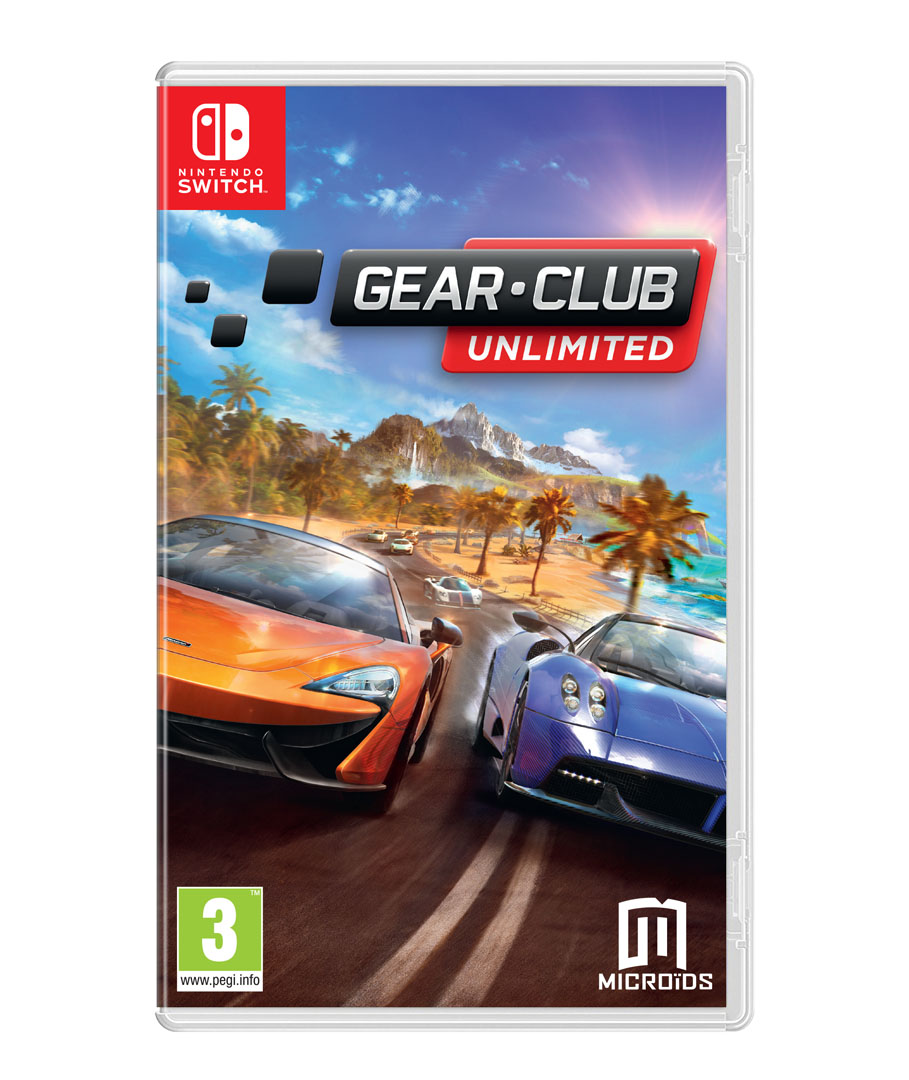