Is the Switch the new platform of choice for rhythm game developers? It pretty seems like it, after the release of Voez, Just Dance, Superbeat Xonic Ex or the amazing Thumper, fans of the genre are spoiled this year. It must be said that the Nintendo console has everything to please: two joycons that allows a smooth duel, a touch screen and a ratio power to portability that allows all developers to try new things that they couldn’t do on mere smartphone productions. That’s what drove award-winning animator Jonathan “JonJon” Ng to colaborate with DJ/producer Kid Koala and the Canadian studio Hololabs to release Floor Kids.

For those of you that never heard of DJ Kid Koala, you should know that he’s quite known in the old-school scratch style of DJing, and worked with names like Bullfrog, Gorillaz, and even movies such as Scott Pilgrim vs. the World. For that, Floor Kids wants to modernize the genre by introducing more complex game mechanics than usual, with a focus on breakdancing, absent from the videogame. It puts us in the shoes of a band of b-boys and b-girls who after trying to make themselves known in their neighborhood, and climb the ladder  from the street to the status of breakdance stars, and eventually perform for peace in front of United Nations Security Council (or what looks like it at least). It’s a silly, yet fun short story, told in the way of small comic book bubbles, but what interests us above all is the gameplay.

Each level offers the player a track imposed of about 2 minutes. Once in the center of the circle, the dancer will perform a set of acrobatic tricks to seduce his audience and push the score counter as high as possible, and wait for the final result or star rating at the end of the song. The player has 4 different dancing movements for each of the 4 iconic styles of breakdance: the toprock which consists of standing dance steps made by pressing the choice on one of the 4 buttons of the right joycon, the downrock which is practiced with hands and feet on the ground (made with a simple press down of the thumbstick) and finally the power, which are spins with your entire body on the ground as long as possible with the help of a simple rotation of your thumbstick. Finally, you have the the freezes, which are postures fixed on an arm or a foot during, which work well with the spins.

To make things even more complex, each of the 8 dancers in the game have their own moves, strengths and movement combos in the different styles that give you score bonuses… So yes, the gameplay can become quite intense and will ask you to memorize the names of the moves so you can optimize your combos and score to the max. The audience will also be active, and react to your groove by asking you from time to time to perform specific style or moves to get bonus points. Finally, twice during the passage, the game will ask you to press in rhythm any buttons of the joystick to increase your score by little. And so despite a gameplay that may seem accessible, the game puts forward the freestyle and will never frustrate the player by forcing him to play a predefined score as it is the case with the competition or other rhythm games. The only imperative is to respect the tempo by pressing the buttons with the beat, but you are free to do what you want on the floor.

This freedom is definitely the highlight of Floor Kids. We start small by trying out the most complex movements as we go along, then we learn the combos and how to stay in the rhythm in the intermediate phases of button mashing, which makes this game smart and addictive. The more we advance and the more we discover moves as well as unlock different characters, all in a simple game campaign, set in a large city that is divided into “arenas”. The latter each have 3 different tracks to perform, to collect enough stars to advance to latter levels, with a minimum of 70 stars needed for the final stage. It will take you around four hours to get to the end of the game, and probably around 3 more to finish all songs at maximum score. So what’s next after that? Well, the game features a multiplayer duel mode, in which everyone wins in the song.

Nevertheless, it’s still competitive, as players on the edge can still put the sticks in the wheels of his opponent by attempting a burn, which translate into a fireball that will disrupt the other dancer if he does not protect it with a shield at the right time. To trigger this burn, it will first have to chain combos in rhythm with the song to build up that level. The important thing about Floor Kids is to stay in the flow, whatever happens, and it’s worth noting that the title does not deplore any lag between the music and the impact of the player who would make the gaming experience unpleasant. Beyond its freestyle gameplay and its beautifully orchestrated magic soundtrack by Kid Koala, we also love the graphical style, drawn in a rather scribbled way, courtesy of Jonathan “JonJon” Ng’s style. The animations are sublime and perfectly fitting with the game’s theme, which look as great on the big screen that it does on the Switch’s own handheld screen.

Floor Kids was reviewed using a Nintendo Switch downloadable code provided by MERJ. We don’t discuss review scores with publishers or developers prior to the review being published.

Floor Kids stands out in the rhythm game genre, thanks to its immense freedom with its fun yet complex gameplay that no other title has. Sure, Floor Kids could be blamed that it's a short singleplayer experience, but its multiplayer mode will be great with friends, and its artistic direction, soundtrack and price makes it a total buy for anyone that has the Nintendo Switch.

Review: Just Dance 2018
Be the first to comment!
Leave a reply » 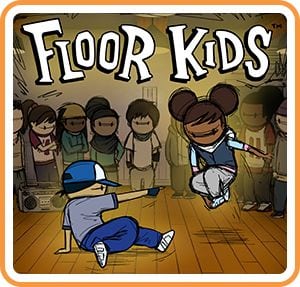