A genre undeniably popular among independent developers, Rogue-like are either a hit or miss. In the case of Tribute Games, after a recent port of Mercenary Kings on Nintendo Switch, the Montreal developer and publisher decided to bring Flinthook to the new console, which gave me the opportunity to finally review it. A simple and addictive game concept, Flinthook has everything you need in a title to come back to it on a daily basis, and here’s why.

From the launch of the game with its unique pixel-art design and catchy menu soundtrack, you will find out that Flinthook is not your typical Rogue-like game. The title lets you play as a space pirate and bounty hunter, whose sole task is to board enemy ships in search of treasures and get rid of heavily-rewarded bounties. That’s all there is to know in terms of storyline or script, although the game is much deeper in terms of backstory thanks to a plethora of relics and lore to collect throughout the game, which helps a lot to with the already great lifespan.

At the controls of this spaceship, you will select a rival pirate ship to board and then venture through various rooms procedurally generated. You’ll have different things to loot such as coins and treasures, but also relics and the core objective which is recovering a number of stones known as ghost gems. The latter will be needed to feed your compass buddy known as Slimey, a sort of weird mollusca creature that lives in your pocket, and will eventually find your assigned bounty on the space map. You’ll be equipped with a panoply of tools and weapons, including a laser pistol, a belt capable of slowing time (Chronobuckle), a secondary weapon for single use like bombs, and of course the quickhook. The latter is the real strength of Flinthook’s gameplay, which is part of the title and indispensable, helping you can twirl through levels but also pop protecting bubbles on enemies and more. The game is not like a twin-stick shooter as well, with the hook and shooting both aimed thanks to the same thumbstick, which makes things pretty intuitive and dynamic.

In the pure tradition of Rogue-like game, Flinthook is a challenging title, that can quickly become a source of frustration but without overdoing it. You will probably finish the first three levels easily and reach your first bounty. That’s when you discover the real hardship of the game, and die several times, which like most rogue-like makes you reset your progress and force you to try from the beginning of the chapter. The comparison with Rogue Legacy, an icon of the genre, is inevitable. You’ll be able to move from one room to another without difficulty, until you discover some levels that are much more arduous, full of enemies or testing your agility and finesse. I do regret the lack of legibility of some rooms overloaded with traps or elements with confusing colors (but that could be me the partially colorblind person), which are not always easy to see from the darker background.

But the ones looking for more challenge will probably explore all the cells of a level to collect temporary bonuses, or a maximum of gold coins to spend at different merchants. On top of these core basic elements, Flinthook has an aspect of customization, since over your failures or successes, you will accumulate experience that will increase your rank. The higher it is, the more you’ll be offered Perks to buy at the black market, which are permanent improvements for your little hero, ranging from the simple increase of your health bar to improving your pistol’s rate of fire, but need to be activated and picked before each of your raids. All these perk cards are bought with green stones gained after each raid or defeating bounties, which will help you eventually to make the next run easier as they stick around when you die.

The only regret I have with Flinthook is the really small amount of bosses, which is disappointing considering that all 6 of them are really well made. Yet, having the game on the go helps get you that special “just one last round” motivation of a mobile game, especially thanks to the extra modes like daily and weekly challenges.

But despite these minimal faults, you quickly forget them thanks to the pixel art of Flinthook, adding a personal touch that gets you into the mood. All the characters, settings, colors and animations are the same high level of details as Tribute Games’ Mercenary Kings. But the whole artistic direction wouldn’t be complete without the awesome soundtrack done by Patrice Bourgeault, with tunes that will remind you of sunday morning cartoon with a hint of 16-bit chiptune. They might feel repetitive in the way they are composed, but you keep on noticing a sort of deepness in each of the songs, with little variety after each loop.

Flinthook was reviewed using a Nintendo Switch digital download code of the game provided by Tribute Games. The game is also available on Xbox One, PlayStation 4 and PC in digital releases. We don’t discuss review scores with publishers or developers prior to the review being published (click here for more information about our review policy).

Tribute Games' Flinthook is a unique take on Rogue-like games, with gorgeous pixel art, catchy soundtrack and addictive gameplay mechanics. Now available on the Nintendo Switch, it's a worthy investment on the console if you haven't played it yet on other platforms. 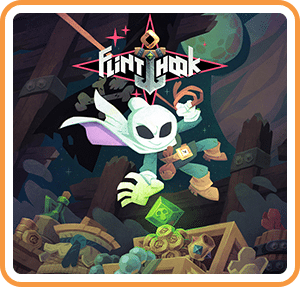