I have spent over 120 hours playing Attack on Titan 2, and the mere idea of defeating giants in an action-packed game was definitely something that I have been waiting for since the original release of Attack on Titan. It comes as no surprise that when they announced EXTINCTION at 2017’s E3, I had to dive into the game and see what it had to offer. Now at first, these two games might have many similarities, from killing giants to protecting key areas on the map all while slicing and dicing your way through hordes of enemies in different shape and form but the developer Iron Galaxy made sure that EXTINCTION had its own signature. One could say that the main difference is in the storytelling and creativity of the game but is that enough to draw a line between the two?

Honestly, I was a little bit disappointed as I was expecting something different, something extra. In EXTINCTION, you are a warrior who needs to defend the walls of the city against a giant monster. By using your grapple, you swing around the giant making sure that you attack the back of the neck to bring down the beasts. Sounds familiar? Is it a mere inspiration from Attack on Titan or just a direct plagiarism? One thing is for sure, there is no sense of originality in the mechanics nor concept. Now with this out of the way, let us look at what EXTINCTION did differently.

In EXTINCTION, you find yourself playing a character called Avil. The last representative of the Sentinels whose sole purpose is to fight giant ogres called the Ravenii hell-bent on destroying and eradicating all of humanity. EXTINCTION is composed of several small missions that help you progress through the story with a couple of nicely animated scenes that do not always pay tribute to what you are doing while the rest of the narration is done through countless of text. Nothing original or mind-blowing so far. Other than the beautifully designed giants, the graphics in this game are mediocre. They were several moments in the game where I forgot that I was playing on a PlayStation 4 or even on Xbox One X.

This is complemented with a very standard audio experience. All this adds up to the frustrating gameplay where you have no freedom to roam around and enjoy all the things Avil can do. Yes, it is great that we can swing around, glide, grapple and feel like Naruto on steroids, but what is the purpose of having all these perks when you can’t really roam freely in the map?

EXTINCTION’s controls are simple but maybe too easy. It is a 2-button combo system that delivers some nice flashy ass whooping. From one side, you can argue that the controls are better that way since you are always on the run, however, having something that simple kills the challenge and could become boring after 4 hours of playtime.

The objectives are straightforward. You need to kill the Revenii, defend the city and rescue civilians from minions called the Jackals. Doing the latter, build your meter called Rune Strike. Once it is full, you will need to use it to decapitate the giants. Fairly simple. The map is useless as it gives you no indication of your enemies and objectives rendering EXTINCTION’s a mere trial and error concept. I have found myself several times dying and trying to memorize the location of things so that I can complete missions.

The level designs are bad. There are no explorations, it is too repetitive and lacks polishing. Things are randomly thrown in making you feel that they just needed to fill in space. Technically, the game is glitchy with a couple of crashes to top it off, framerates drop significantly when fighting giants.

Luckily the game is short and does not offer anything special. It is a bad copy of Attack on Titan minus the amazing backstory of the anime. On paper, I am sure the game had many good ideas and the developers were probably optimistic, but I would not suggest anyone buy this game as the execution could be one of the worst I have seen this year.

EXTINCTION was reviewed using a PlayStation 4 and Xbox One digital version of the game provided by Iron Galaxy. The game was tested on both a normal PlayStation 4 and Xbox One X for technical comparison. The game is also available on PC via digital and retail store releases. We don’t discuss review scores with publishers or developers prior to the review being published (click here for more information about our review policy).

If you hope of a thrilling adventure with intense battles against giants with EXTINCTION, then I hope you're ready for the disappointment. The race against the clock aspect of the game really kills all the interest and the pleasure to face the giants, and with really subpar graphics and not much to do, it's difficult to justify the price range. 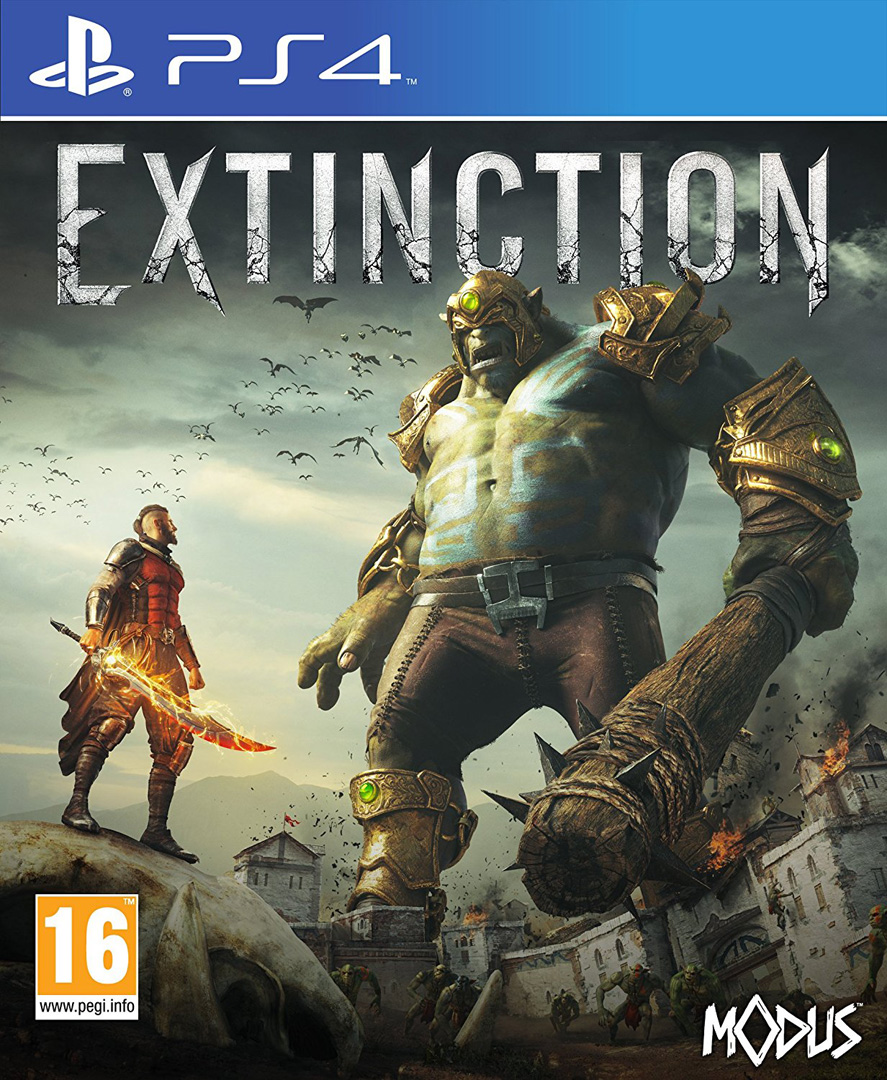