Most people have a lot of misconceptions about history and historical facts, and it seems like they’re likeliest to mix up the details on the ancient Vikings. Tons of films and games have tackled the subject, but a lot of them go for a more Hollywood version of the story. That’s why I was excited to see Expeditions: Vikings.  The game purported to have a realistic, grounded portrayal of the Vikings in an engaging strategy game. Did they pull it off? Let’s find out. Brilliantly enthralling storytelling meets tight gameplay with a historical setting that teeters on the edge of realism and mythological symbolism, all while remaining grounded in reality.

To begin with, Expeditions: Vikings has great writing and a lot of lore behind it. There are lots of great characters and the backstories for your party members end up giving a more personal feeling for your Hird (which is what your party is called). There are dates and locations for the characters, as well as little personal details.

Expeditions: Vikings also does an amazing job of bringing the 8th century setting to life. Even though the map is primarily top-down, you’ll find a lot of detail here. Most locations and maps are beautiful, especially in terms of the color palette. From the snowy plains of Denmark to the wooded hills of Britain, you’ll find plenty of pretty landscapes

The core of Expeditions: Vikings is, of course, the quests, and these were my favorite part of the game. The storylines are wonderfully written and the quests stay focused and avoid being grindy. More often than not they’re large, branching quest chains with several options and methods to finish. Dialogue with NPCs and main characters is engaging and avoids falling into the trap of tacky, over-exposed VG writing.

Moreover, throughout Expeditions: Vikings, you’ll have the chance to build up and upgrade your home village, and this aspect really gives it some more depth. The village of course grows based on how many resources you invest, and you can really flesh out the village and make it a developed burgh. You can add new vendors, buildings, resources and other things to really give it that home feeling..

The game’s turn-based combat is fun and engaging and properly challenging without feeling overly cheap. Small things like the ability to use non lethal attacks in combat, changing how certain quests will flow. The time limit is implemented very well and actually gives a sense of tension without ever becoming a problem. I didn’t even realize there was a time limit until halfway through, after hours of messing around, and I still finished with plenty of time to spare.

Now, Expeditions: Vikings had some limitations that, in my opinion, stopped it from really shining. To begin with, the battle music lacked variety. The ambient music is top notch but after close to 40 hours I’m tired of hearing the same battle theme. Sound design was a weakness overall, actually, as I found the sound effects to be lacking. Also, the voice acting is capable but it could have been better.

Moreover, there’s a shortage of variety when it comes to skills. Essentially, all your party members have the same skill pool, meaning you’ll have the same weapons and abilities all around.

Overall, this game is a fantastic historical Viking TRPG with a lot of heart and soul. If you’ve got literally any interest in the setting, or Vikings, or strategy RPGs you should give this one a shot. Expeditions: Vikings has a ton of content, and it’s at a great price point, so you should go for it if you’re a fan of the setting/genre.

Expeditions: Vikings was reviewed using a PC downloadable code of the game provided by Logic Artists. The review was tested by Mazen Abdallah on a PC running Windows 10, with an 8GB NVIDIA Geforce GTX 1070 fitted on a 4th Generation Intel i7 4790 3.6Ghz CPU and topped with 16GB of RAM. We don’t discuss review scores with publishers or developers prior to the review being published

Expedition: Vikings is a great game for fans of Viking lore. It tells an engaging, well-written story while doing its best to remain faithful to Viking lore. It has some rough edges, but overall it’s a great tactical RPG.

Review: The Mooseman
Be the first to comment!
Leave a reply » 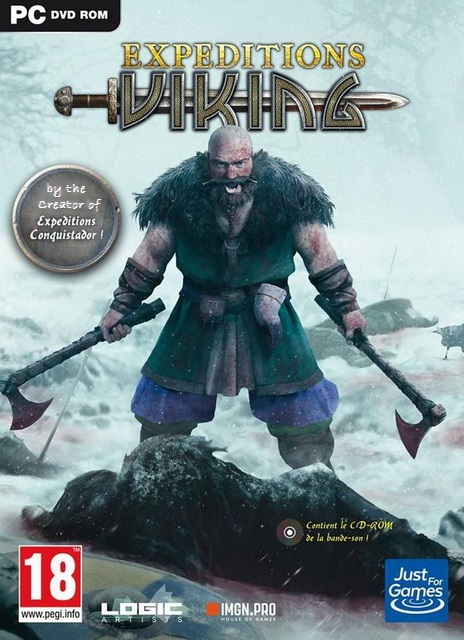