When I was growing up, like a lot of dorky kids, I was super into heavy metal. It wasn’t just the music; it was the whole aesthetic and lifestyle. The brotherhood of metal, the headbanging, etc. I loved all things metal, and I wanted to immerse myself in the culture as much as possible. This included metal videogames. The only problem was that metal videogames were often kinda lame. You had schlocky licensed titles like Earache Metal Racing (it sucked), more fleshed out titles like Brutal Legend (kinda disappointing) and obviously games that *had* metal in the soundtrack but weren’t really about metal. Double kick heroes aims to fix it

The concept of Double Kick Heroes is pretty simple. Zombies have taken over, and a group of intrepid metalheads must survive and fight them off. That’s basically the premise of the game, which is established through a short cutscene. After that, you get a brief tutorial. Essentially, the band members are in a vehicle and they’re being pursued by zombies. You need to press buttons in time with the beat to shoot zombies. Zombies come from the top and bottom of the screen, and so each button corresponds to a different position, meaning you need to alternate buttons to shoot zombies approaching from different directions. Any time a zombie gets close, you shoot him to slow the horde down.

And that’s…pretty much it for gameplay. There are boss sections where you need to move around as well, but for the most part it’s guitar hero with zombies. Your weapons get more powerful as you hit the notes in time, but there’s not much variety beyond that. The issue, I would say, is that you’re really just doing the one thing; matching the beats and occasionally switching it up. The game offers a ton of different difficulty options

The game does make up for it with a pretty cool soundtrack made of some fun, engaging metal tracks, and that’s what helps keep it entertaining. Like any good rhythm game, eventually you don’t need the button prompts as much, as you know the rhythm and you know how to tap your fingers accordingly. I’d say the biggest problem is that the songs are like 3 minutes long and you basically end up repeating fairly simple patterns. Also, a lot of the tracks are, for lack of a better term, soundtrack-y, so they sound like the kind of music you’d hear in the background of a game, not a single off an album. This means, however, that the songs are fairly consistent, meaning you’ll be seeing similar patterns for 3 minutes.

The biggest issue, I feel, is that Double Kick Heroes doesn’t manage a real sense of variety, at least not enough to make the levels feel less repetitive. The soundtrack has some killer tracks, but the fact that you have to spent 2 full minutes on each track to unlock new ones means progression is pretty slow. Boss fights mix it up, but overall you’re still just tapping in tune to the beat, and the fact that they’re going for a Rock Band/Guitar Hero format means the game really just appeals to that core audience.

Double Kick Heroes was reviewed using a PC digital downloadable code of the game provided by Headbang Club. The review was tested on a PC running Windows 10, with an 8GB NVIDIA Geforce GTX 1070 fitted on a 4th Generation Intel i7 4790 3.6Ghz CPU and topped with 16GB of RAM. We don’t discuss review scores with publishers or developers prior to the review being published (click here for more information about our review policy).

While Double Kick Heroes has some sweet tunes, it doesn’t do enough to set itself apart from the classic Rock Band formula, and as such it feels repetitive at times. Fans of more standard rhythm games will enjoy it, and metal-heads will surely welcome a rhythm game with a good soundtrack, but it’s not that engaging on the whole.

Mazen enjoys anything with over-the-top violence, dark humor and a real challenge. He's still pretty big on single-player games and he's always looking for new titles he might've missed out on, so if you know about a crazy new title that's flying under the radar, look him up!
More Goodness
2DArcadeFeaturedIndie 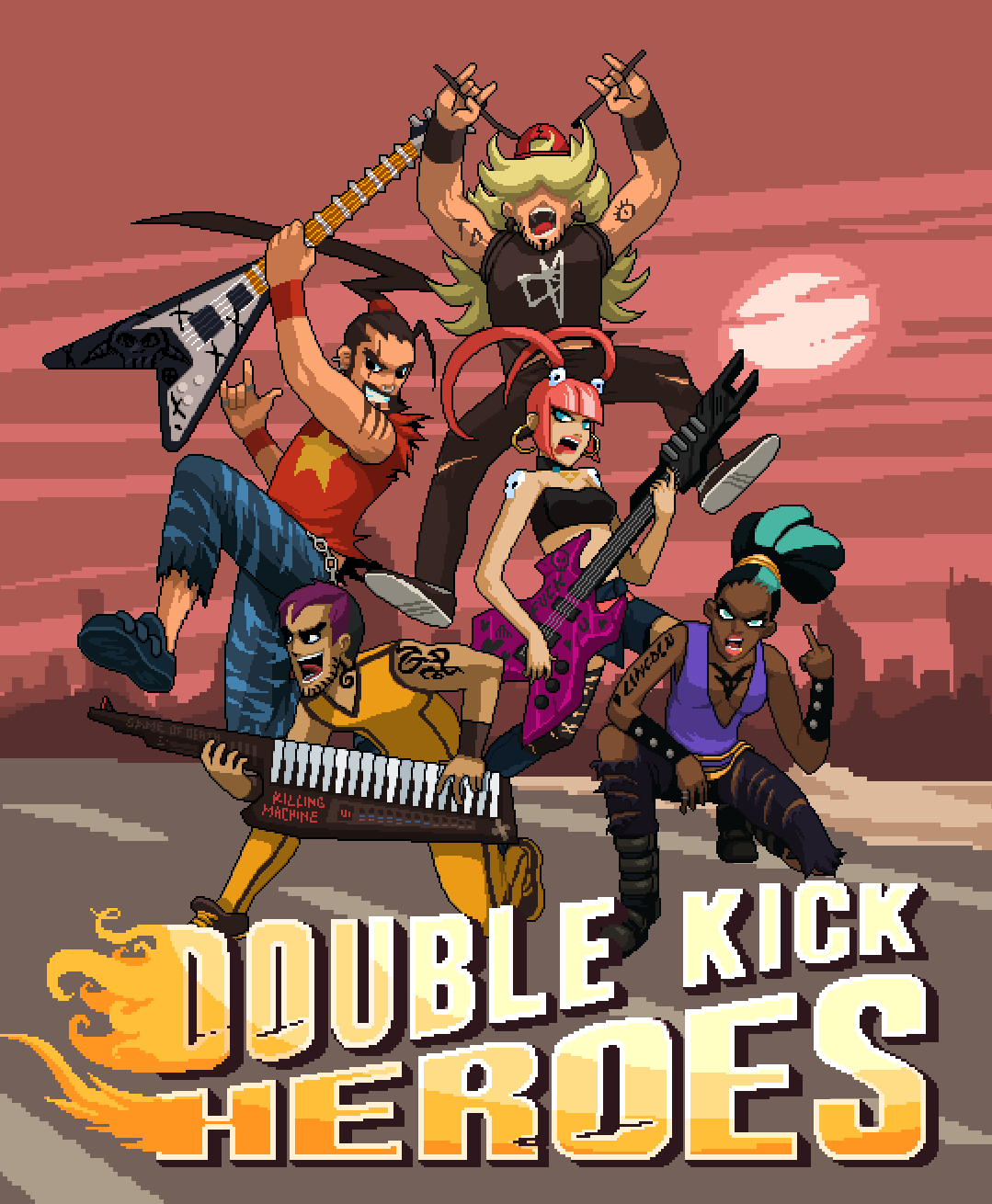