After a different experience with DiRT Rally which didn’t work out well with fans, the teams over at Codemasters come back with DiRT 4, a more accessible, varied title, but not necessarily more interesting that its predecessors. For those who never heard of it, the DiRT saga stems directly from the ancestral Colin McRae Rally game, allowing players to indulge in their mechanical impulses as a rally racer wannabe. With this DiRT 4, Codemasters wanted to offer a fairly complete off-road experience, while relying on the strengths of DiRT Rally, namely, the rally part and making use of their exclusive licence rights to the FIA World Rallycross Championship (or WRX).

Like all other games, DiRT 4 starts with a small test, aiming for the game to learn your driving skills, and offers you a suitable difficulty level. In addition to choosing your optimal challenge that includes driving assist, AI levels, manual or automatic shift changing, you can also decide to opt for a “Gamer” or simulation gameplay. This parameter (which can be modified at any time in the future) makes it possible to adjust playability, and doesn’t restrict the entirety of DiRT 4 to just hardcore simulation players, with a less demanding play style, while still maintaining a minimum of simulations. The other mode, as you would guess is a more demanding and punitive, not ready to forgive the slightest error in breaking, or the slightest rushed acceleration when approaching a turn.

Once the driving style and difficulty chosen, DiRT 4 offers a much less austere interface than DiRT Rally. A menu much more jovial, enough to delight those who were pestering against the previous production of the studio. You got your typical career mode, which has you create your wannabe racer, and requires alternating between various disciplines included in the game (mostly Rally, Rally Cross and Historic Rally). Each discipline offers various challenges, of course, with different types of vehicles, but also very different driving experiences depending on whether you pick a good ol’ Mini Cooper (and not the modern weird car), or a roaring 2016 DS3 WRC.

Rather well designed, the career mode offers a nice margin of progression, and allows above all to play in all categories. Of course, rather than asking the player to chain one stage after the other, Codemasters has integrated a fairly neat stable mode, which allows the driver to create his team, hire staff, improve facilities, deal with sponsor relations. All this of course, to save cash, get the upper hand in terms of R&D or even repair and upgrades… You quickly realize that everything is easily manageable with a few clicks, yet brings a real addition to the overall experience, making DiRT 4 is full of little touches that will please the purists.

On the garage side, DiRT 4 incorporates fifty cars, divided into different categories. There are karts, buggies, trucks, WRC legends, WRX, etc… In short, everything to satisfy the racing enthusiast, yet still a very small amount of cars in comparison to previous or other games. On that front, vehicles are won in the career mode, but some can only be acquired via the dealership to buy a particular model and customize it according to your liking.

In racing, DiRT 4 proves to be a confusing gameplay during my first races. After a very demanding DiRT Rally, it is quite amazing to feel the easier control (even in Simulation mode), more permissive than last year’s title. However, the game is not an arcade title, far from that, but i’ll admit that the gameplay is less punitive here.

On the visual side of DiRT 4, the game may  shock the player a bit. While the interface has been beautifully reworked, and the cars are decently modeled, we must admit that some environments and other elements are graphically poor, with limited textures at times, and even ridiculous early 2000s animations and effects. While Landrush stages are fun, others in the Rally are difficult to watch, but at least, the display is locked at an impeccable 60FPS stability. On the other hand, if the visual section can disappoint, I’d like to give a special praise to the soundtrack of the game, which is exceptional, whether in terms of sound effects, engine sounds, brake whistles, or even the tunes and playlists.

On the gameplay side, the Rally section is perfectly playable, but some may pester (very strongly) against this same gameplay in Land Rush mode, which has some unforgiving ways to make you regret doing mistakes, and particularly hard turns to deal with. Good news for snow rally enthusiasts, Codemasters has done a good job of fixing their gameplay on that front, with a much more pleasant pace on Swedish roads than in DiRT Rally. Overall, apart from the technical front which is a little disappointing, DiRT 4 offers very good driving sensations.

In addition to the Career Mode, DiRT 4 also offers a Competition Mode, which allows you to participate in daily or monthly community events, with very large bonuses. Of course, the online multiplayer is also part of the game, with those new arcade modes, like cat & mouse, present in the previous release.

DiRT 4 was reviewed using an Xbox One digital copy of the game provided by Codemasters. The game is also available on PlayStation 4 and PC via online stores. We don’t discuss review scores with publishers or developers prior to the review being published.

Despite an average graphical game, DiRT 4 is still a great off-road racing experience, with great playing sensations and a real attention to details. Some will reproach it with too easy gameplay, but it is obvious that this DiRT 4 was made to appeal to everyone, unlike the previous games, dedicated exclusively to the hardcore fans of the franchise.

Review: DiRT Rally
Be the first to comment!
Leave a reply » 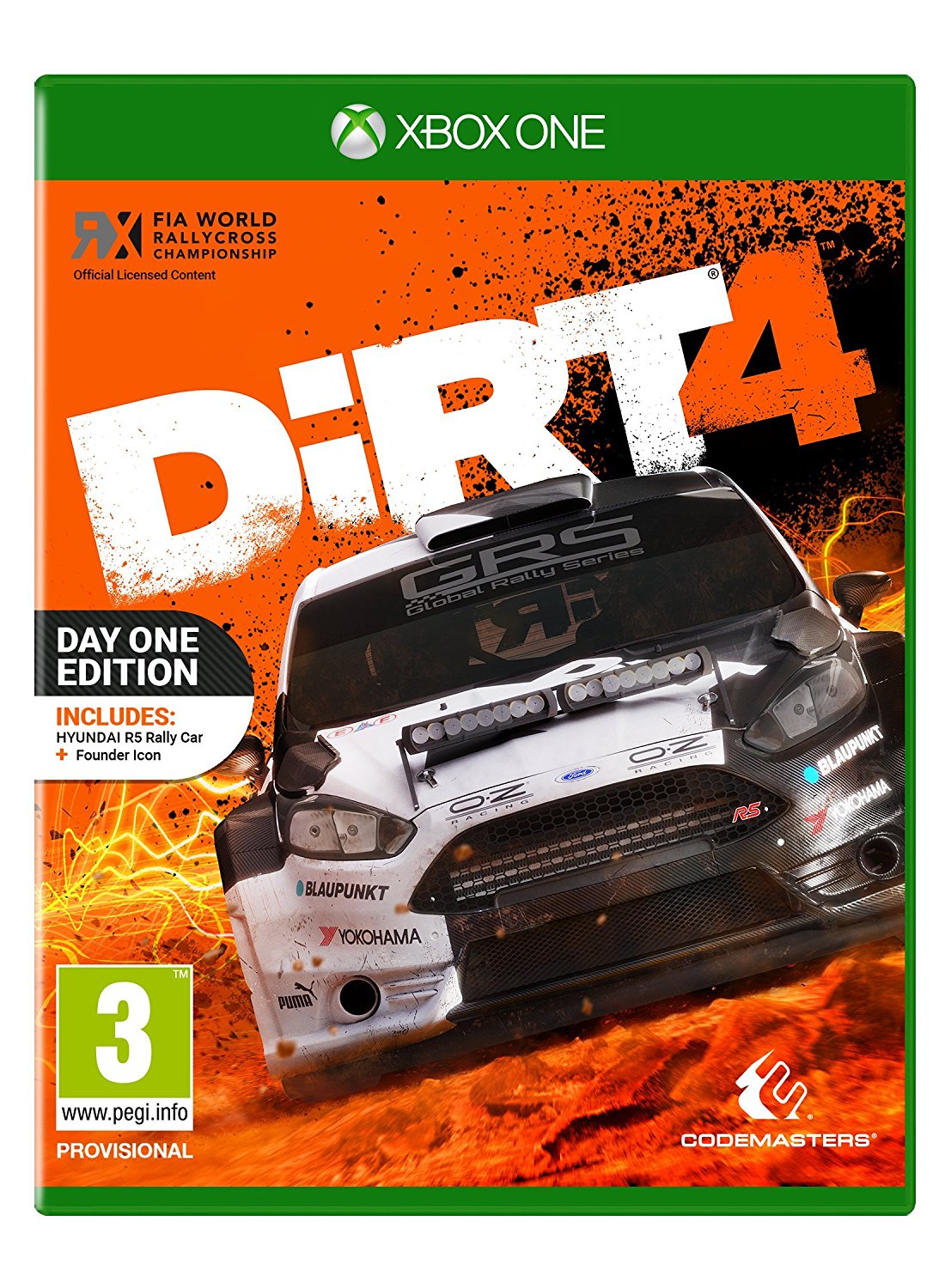