Diablo is an absolute classic and one of the biggest names in gaming, and I think one of the reasons it’s so well-regarded is the fact that it’s always been a trailblazer in gaming. The first two games were landmark titles in the dungeon crawler genre, and they laid down many of the foundations in modern RPG’s. In fact, concepts like RNG and loot generation often trace their origin back to ideas first implemented in the first Diablo games. The third Diablo game is no different. Concepts like games-as-a-service and online singleplayer started with Diablo III, and while they were controversial decisions, I believe they’ve paid off. All that design philosophy has led us to this momentous occasion: Diablo III: Eternal Collection on Nintendo Switch.

Diablo managed to evolve its gameplay and streamline it, and one result was that it was able to make a smooth transition to consoles. In fact, the action was so well developed on consoles that many critics actually liked the console versions better. But with Switch it’s gone even further and created probably the coolest version of the game to date.

The Nintendo Switch has always had one real selling point that no other console could challenge: it’s a hybrid between portable and home gaming. That means you can start a game in your living room and then just yank out the machine and head to work to continue the gameplay. The thing is, some games kinda lend themselves more to longer, deeper gameplay sessions, and they don’t necessarily work as well in this setting. Diablo III: Eternal Collection is not one of those games.

Let’s pause for a minute and talk about Diablo III as a game. For those of you unfamiliar somehow, Diablo as a series is a top-down hack-and-slash action RPG with rogue-like and dungeon crawling elements. Diablo starts you off with the ability to choose your class and customize some abilities, and after that, you’re thrown straight into the action to work out what the hell is going on in a quiet little village that had a falling star situation that quickly turned into a ‘crazed undead eating faces’ scenario. Diablo has probably one of my favourite selections of classes in gameplay, because a lot of the classes are twists on classics. You’ve got magic-type fellas like the Wizard and Necromancer, who are kind of classics, but then you have twists like the Witch Doctor. In terms of melee, there are hunters and barbarians, but also my personal favourite the Crusader. Each character has its own unique gameplay style, and you can bet your sweet behind you’ll be itching to replay the game with a different class and difficulty to try and get a different experience. A lot of these classes aren’t on vanilla Diablo III, so you’ll be pleased to know that Diablo III: Eternal Collection has probably the most complete Diablo experience thus far. It’s had several years to learn from its previous ports and the controversial PC launch, and we have a game that has really figured out the odds and the ends.

In terms of odds and ends, Diablo III: Eternal Collection does an insanely good job of taking a genre that has a very specific fanbase and making it really, really accessible. Choosing abilities and weapons is streamlined insanely well, and you can quickly and easily swap out shield bashes with massive Area of Effect attacks or swap out your massive fire spell with a move that’ll open up little vortexes everywhere. Getting new loot is also a breeze, which is great considering many fans argue that loot is the crux of Diablo. Diablo doesn’t just get credit for making its gameplay accessible; it deserves serious points for making really effective use of the Nintendo Switch’s limited screen space. I love the Switch but it’s a tiny device in handheld mode, and a good UI needs to accommodate that. I never really felt like things were cramped in handheld mode, and I was able to read UI elements clearly for the most part.

As for the story, I think we have a pretty good idea of the basics thus far, and I feel like Diablo’s story isn’t bad per se, but it won’t be winning any Oscars. It’s a fairly straightforward tale of taking on the supreme evil forces of hell, and while it has some fun twists and turns in the third act, it’s ending isn’t amazing. I’d say the biggest strength of Diablo III’s story is the individual characters you meet, as many of them have interesting and engaging motives. Tyrael, in particular, is one I liked, because like many other characters in the story he needs to make a manner of personal sacrifice to fight the supreme evil. Of course, Diablo III is rife with fan service, so you’ll be seeing some familiar faces from the first two games.

All in all, however, Diablo III: Eternal Collection is a game that aims to bring a new generation of fans into the mix. The gameplay structure is so streamlined and organized that it ends up feeling it was designed specifically for the switch. Diablo III: Eternal Collection is honestly the best non-Nintendo game on Switch thus far, and it’s a worthy addition to any Switch library.

Diablo III: Eternal Collection was reviewed using a Nintendo Switch digital download code of the game provided by Blizzard Entertainment. The game was previously made available on PC, PlayStation 3, PlayStation 4, Xbox One and Xbox 360 via digital and retail store releases. We don’t discuss review scores with publishers or developers prior to the review being published (click here for more information about our review policy).

Diablo III: Eternal Collection on Switch introduces gamers to perhaps the most refined version of the game, and it offers an immersive dungeon-crawling experience that you can play on the go. It runs very smoothly and looks great, but expect to sink a ton of time in if you want to get good.

Review: Starcraft II: Legacy of the Void
Be the first to comment!
Leave a reply » 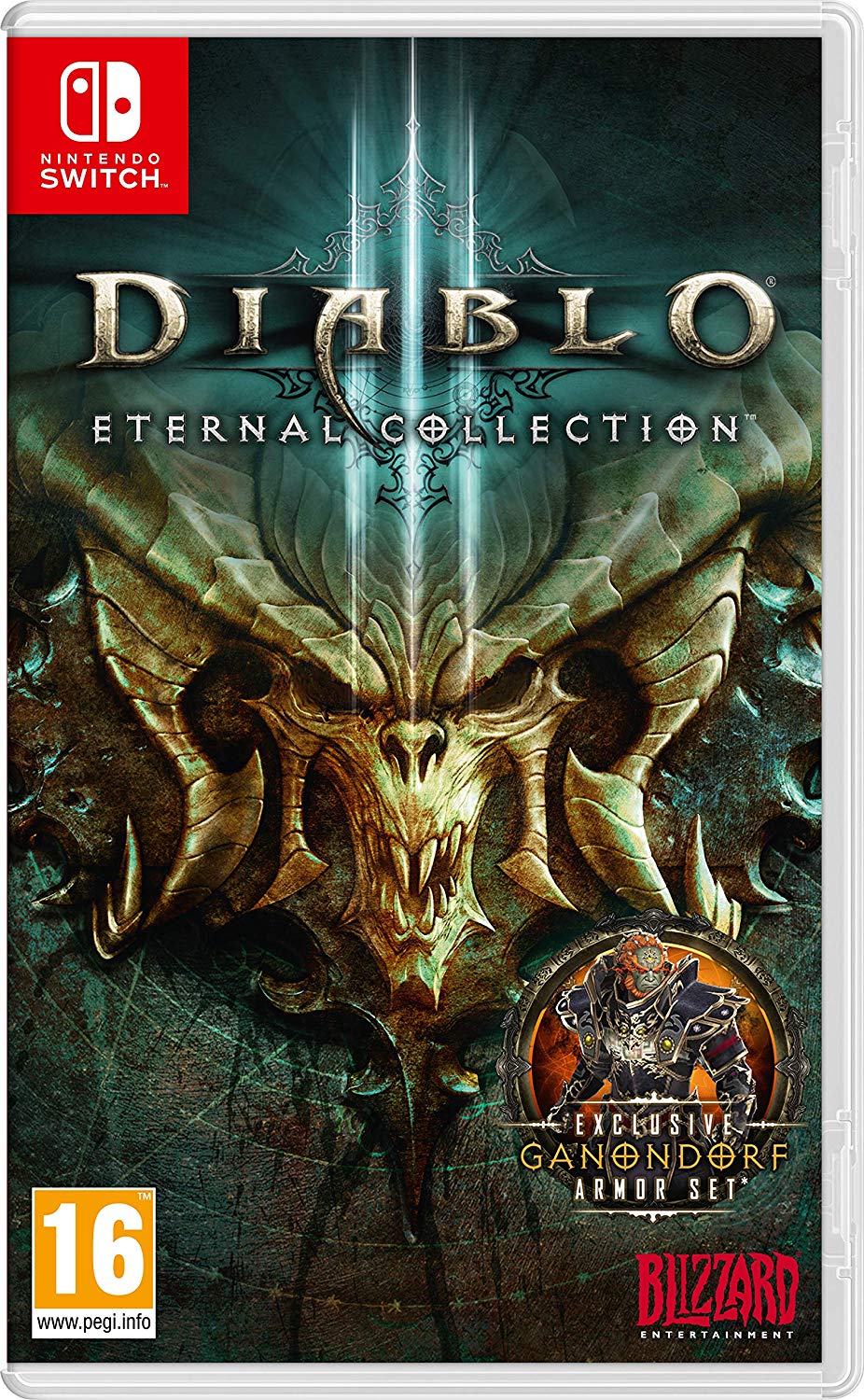