Ah, Zombie games. Remember when they were hip? Well, that went on for like 10 minutes before the market was flooded. Nowadays people are definitely over the whole zombie trend, and I think we’re wiser for it. That’s not to say zombie movies, books, and games don’t exist; it’s just not a bandwagon everyone wants to ride. Zombies as horror figures can still be used to tell good stories or craft interesting worlds, as evidenced by excellent titles like Dying Light. But you need your own take on it. That’s something Death Road to Canada does very well.

As the irreverent title suggests, Death Road to Canada is a fairly irreverent title. This is definitely the first point in its favor. Zombie movies and shows usually take themselves way too seriously, and as works like Shaun of the Dead showed us, some gallows humor goes a long way. Death and zombies are treated flippantly, in an absurdly cartoony way that makes light of the situation. However, while the game doesn’t take itself very seriously, it has a surprisingly serious approach to resource management.

In terms of gameplay, Death  It takes the standard ‘fighting off zombies’ deal and it mixes it with an Oregon Trail-style resource management game. The game starts with your character embarking on a road trip to Canada to get away from hordes of zombies. Now, you can choose to go randomly generated or create your character based on set traits. Of course, more playthroughs unlock new perks and traits, so it’s the usual roguelike system where you’ve gotta play more to get a starting advantage every time.

The game starts with you on the eponymous Death Road, and you have a set amount of resources that you need to keep track of. Every so often, you need to stop and loot or set up camp, and you get a choice of what course of action to take in every case. There are also random encounters, and of course, you choose how to survive. This is one essential way Death Road sets itself apart; it’s not just a mindless hack’n’slash where you lay into hapless dead dudes. Each decision needs to be measured against its cost and benefit. You don’t just have resources to watch out for; you also have your mood and your status, which are affected by your decisions. When looting, you get reports of how big the crowds are and how dangerous it is, and you need to plan accordingly.

I say you need to plan accordingly because the game’s combat is a bit wonky and you don’t have much in terms of weapons. This is, of course, how a good horror-themed game makes you feel less powerful. While I would have been cool with better combat mechanics, I can see it from one angle. Your character can’t fight because you’re not a fighter, but rather a normal person. You quickly learn to avoid getting mobbed, so you swing a few times and back off. It’s a good way to take advantage of the whole zombie theme; the whole idea is that the zombies have vastly superior numbers, so you need to be careful and avoid getting mobbed.

Of course, Death Road is also very heavily based around co-op, and along the way, you also have companions who you can bring along to help you out. You can either meet AI companions on the way or bring in a buddy (which I recommend). Then you also need to learn to manage your team and assign a leader. So despite the fact that it’s a top-down indie, it’s actually pretty deep in terms of gameplay.

Death Road to Canada shows why indie games can achieve so much with so little; they design intuitive and straightforward systems that are nonetheless challenging and layered. Death Road is a straightforward game on the surface but managing your resources and surviving becomes harder as the game goes on, and once you’ve sunken in a little time you’ll notice the challenge ratchets right up and you need to start making tough calls. This, in many ways, is the perfect feeling to have when playing a survival game; it’s all about making the difficult decisions.

Death Road to Canada was reviewed using a PC downloadable code of the full game provided by Rocketcat Games. The game is also available on PC, Xbox One, PlayStation 4, iOS and Android mobiles devices. We don’t discuss review scores with publishers or developers prior to the review being published (click here for more information about our review policy).

Death Road to Canada manages to breathe life into the zombie genre and create a fun, engaging experience that’s perfect for the pick-up-and-play nature of the Nintendo Switch. It looks simple, but its pixelated veneer hides a surprisingly complex survival game that’ll grab you like a horde of zombies 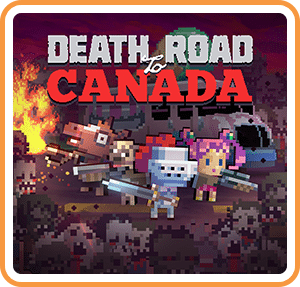