Editor’s Note: After the game’s original release, this review has been updated following the release of Crash Bandicoot N. Sane Trilogy on Nintendo Switch (and Xbox One and PC), as well as numerous free updates to all customers which reflects on the overall score, and final verdict.

A year ago, the PlayStation 4 brought back its most iconic “unofficial” brand mascot: Crash Bandicoot. Reborn from the ashes in a complete remastered experience, Crash Bandicoot N. Sane Trilogy allowed me to relive three experiences that were a cult classic for most owners of the original PlayStation. Unfortunately, the exclusivity signed with Sony left out other platform players, but things changed and now exactly a year later, PC, Xbox One, and Nintendo Switch finally get to try it out.

Now let’s be clear from the get-go: this updated review is mostly a speedy one, focused on the technical point of view between the Nintendo Switch and the previous PlayStation 4 version. Indeed, while Sony’s machine runs the game in Full HD and 30 frames per second (or 1440p and 30 frames per second on the PlayStation 4 Pro), the Nintendo Switch runs at a reduced 30 frames per second, in 480p on the go, or around 720p  in docked mode. When you get deeper into this, comparing the two platforms side by side, we also notice that the Nintendo console displays textures that are a tad less precise, and sometimes suffer from aliasing. What is strange is that connected to a TV, Crash Bandicoot is sharper than the portable version, something that is usually the opposite of other games. As for the loading times, they are relatively long, but it is a problem that is also on the PlayStation 4.

Of course, jumping on his Switch to take control of Crash is not without risk. As you know, the gameplay mechanics of this trilogy are aging and now in the midst of 2018, they are not getting younger. If the nostalgic will find nothing to say, the new players could be somewhat surprised by this old-fashioned gameplay. The Toys for Bob studio, which developed the Switch version (and worked previously on the Skylanders series as well as the upcoming Spyro Reignited Trilogy), did a great job of making the game compatible in various forms. Whether via the Nintendo console’s Pro controller or in a portable version, you can easily take charge of the game’s heroes, even if I regret some strange choices like the slide done via the R button.

On Switch, the main advantage is the ability to play the game everywhere, and of course, this is the only platform that allows that experience. Crash Bandicoot N. Sane Trilogy, in any case, is a terribly catchy title on which you can spend hours and hours trying to break records and collect diamonds. Also note that on the content level, we find exactly the same as on PlayStation 4, with the additional “exclusive” levels released Stormy Ascent, but also a newly added one with the new platform release known as Future Past.

After WipEout and Parappa The Rapper, as we wait for the remake of Final Fantasy VII, the Japanese giant continues with its nostalgic re-release of iconic PlayStation releases thanks to Activision this time, with a Crash Bandicoot compilation of all first three episodes called Crash Bandicoot N. Sane Trilogy.

This trilogy includes the original 1996 Crash Bandicoot, a project imagined in California by two young gaming creators (Andy Gavin and Jason Rubin, last president of THQ) led by Mark Cerny, who was in charge of Universal gaming division. Created exclusively for the PlayStation, this platform game really showed the true potential of a complete 3D sidescroller on different angles, but also facial and body animations that were the highest quality at that time.

Followed by two more sequels in 1997 and 1998, alongside other yearly major video game franchise releases during the Christmas holidays, these three episodes as a whole were the root of what made Crash Bandicoot such an iconic series. If the first two were mostly the same in terms of gameplay, the last one – Crash Bandicoot: Warped – is probably the most different, introducing travel through time, unlockeable powers, vehicles and even a second playable character, Coco Bandicoot, the sister of our hilarious Marsupial. Crash was for long the unofficial mascot for Sony and its console, borrowing a lot of attitudes and attributes from the iconic characters of a big Nintendo rival, Sega’s Sonic the Hedgehog.

This simple introduction was mostly for those of you that never played any of these three games, or even heard of Crash Bandicoot before the trilogy. While the original designers and developers of Crash Bandicoot have scattered for a long time, Vicarious Visions (a division of Activision since 2005) has modestly upgraded the package without changing this timeless gameplay. And to say the upgrade is a bit weak, as the work is close to colossal and it will hit you the moment you boot up the trilogy! 20 years and three generations of consoles later, Crash Bandicoot N. Sane Trilogy is almost a modern release, decorated with fresh new textures, brand new modern effects such as water reflections, the details on Crash’s fur, and so on. However, it is surprising that the game is only locked at 30 frames per second, and for a 1996 game re-release, how the hell are these loading screens still that long considering you will die a lot!

Don’t get me wrong, we’re not talking about dying so much to the point of comparing it to Bloodborn or Dark Souls, but be aware that each entry and exit to a new level or in one of the three games is an average of twenty seconds. Needless to say that nothing really justify so much loading time, and I understand the game has been upgraded, but not to this point of having to wait for textures and levels to load in the background.

Under the fresh coat of paint of Crash Bandicoot N. Sane Trilogy, our marsupial is still at heart a retro lover, which you’ll notice during your first couple of levels, with crude and rustic platforming mechanics. Crash Bandicoot is a cool action game but it is a “normal” platformer for a 2017 release, banking more on its nostalgia than refining the mechanics for modern days. Think about it, Crash Bandicoot has gone through two decades, aging in a cellar, bringing back with him the technical limitations of the past. More than half of the games are side-scrolling levels which want you to cross from point A to point B  with some alterations from time to time that gets switched to a 3D setup, such as escaping a giant boulder or occasional driving sections on a jetski and other vehicles.

The gameplay and actions of the character has been making the buzz on the Internet, with buggy jumping rants, but I have no issue with that, considering I come from a generation of players that endured this back in the 1990s, but it’s the camera that is the bane of my existence, especially in terms of its distance. This is all the more unfortunate when the game slips us a platforming sequence that needs to be played with a millimeter efficiency, between endless crates of Nitroglycerin explosives, cleverly arranged on a slippery ice surface… You’re going to rage quit, I can tell you that. Also on that precision, the collision boxes of the enemies are what they were, that is to say often badly done, so you can assume that if the platforming sequence didn’t kill you, then those buggers will.

Now don’t get me wrong, Crash Bandicoot is not a difficult game by nature, especially since most of the mentioned issues will fade after re-calibrating your muscle memory. Plus, as you go through the trilogy, you’ll also notice the upgrade that was made at the time, adding the slide and butt stomp in Cortex Strikes Back, and the double jump Warped (the later coming out during a phase where platformers were made more accessible for all). The bosses of the Crash Bandicoot N.Sane Trilogy have even become a little easier to anticipate, plus adding modern days checkpoints and automatic saves, it makes our lives easier (in comparison to what we had to go through in the 1990s). The only true challenge of this trilogy consists in reality, and as in the past, is to reach to 100% completion, by beating all levels, collecting all the gems, keys scattered around the game and other sorts of challenges.

Crash Bandicoot N. Sane Trilogy was reviewed using a PlayStation 4 and Nintendo Switch downloadable code of the game provided by Activision. The game is also available on Xbox One and PC via digital and retail store releases. We don’t discuss review scores with publishers or developers prior to the review being published.

Now available on the Nintendo Switch, Crash Bandicoot N. Sane Trilogy is less beautiful than the original PlayStation 4 and the other new platforms, but is still an excellent experience that you can play on the go. A must for nostalgic players or platforming fans. 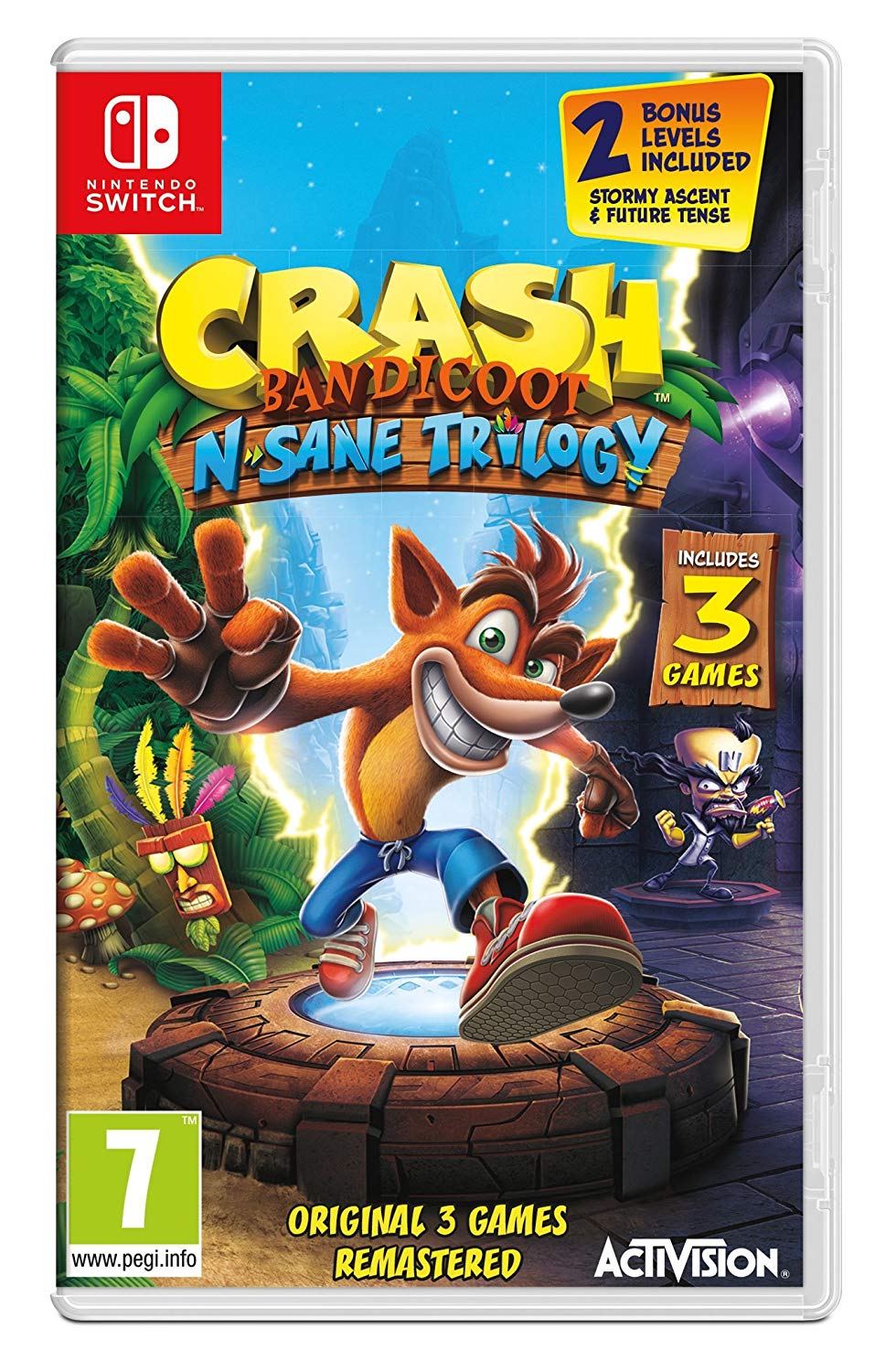