Editor’s Note: Less than a year after the game’s original release and our review on Xbox One, this piece has been updated following the release of the game on Nintendo Switch, as well as the content updates that are available to all which reflects on the overall score, and final verdict.

If you’re a comic book fan, then you probably know Battle Chasers, a series created by Joe Madureira back in 1998, leaving us with a crazy cliffhanger after its ninth volume. Now the American comic book writer is following another path, one of a videogame designer, and after founding Vigil Games and launched the Darksiders franchise, he returns with his newly founded studio called Airship Syndicate, and gives us Battle Chasers: Nightwar.

Now let’s start with the most important thing. If you are a fan of the comics with the same name, hoping that Battle Chasers: Nightwar will bring a conclusion to the cliffhanger, then you’ll probably be disappointed. The game is nothing but a “filler”, one that is great though for those that never heard of the lore of Battle Chasers. The game will tell the story of Gully, as she search for her missing father, who also happens to be equipped of a pair of mystical gloves that make her a force to be reckoned. Alongside her is the formidable Garrison, the imposing golem Calibretto, Knolan the mage and finally the deceitful thief Red Monika. After being attacked by bandits, lost on Crescent Isle, this band of misfits will discover that this place is overflowing with Mana but also is under a deadly threat.

Battle Chasers: Nightwar is divided into three distinct segments, with two of them dedicated to an exploration mechanics. The first part is to survey the archipelago map and reform your squad scattered since the bandit attack. Other interactions, with loot, NPCs and zones of discovery are possible, and of course, there is no shortage of dungeons, which for the most part are randomly generated based on your level. Eventually, you’ll end up returning to the central village of Malhameau – the main hub of the game – to improve a little your equipment, and eventually get back to the grind and get better rewards.

Once you enter one of these hostile places such as dungeons, the game change changes mechanics to more of an isometric view dungeon-crawling (very much like Diablo for example). You’ll venture into these, paying attention to traps, solving puzzles and collecting fun pieces of lore, as well as loot chests that will help you get stronger or fill your sack of gold. Soon enough, the game will build its way so you’ll make use of each of the six protagonists dedicated talents, either to help find secret passages, recover some health, get stealthier or stun enemies before the combat phases.

On the front of combat, Battle Chasers: Nightwar system uses a turn-based system, with a number of parameters quite important to take into account. The game combat is highly strategic, relying on tactics, and plan according to the initiative bar which is on the left of your screen. The simple attacks will be immediate but not always effective, and you’ll have to rely on more advanced skills that require more time to prepare or even expose you to danger. That is especially true when you do not know the enemy facing you, and it will be essential to study your entire arsenal, but also learn all sorts of buffs and debuffs in the game, such as stun, burn, poison and so on.

Putting down shields, inflicting poison on the enemy, healing, etc… Everything has a Blue Mana cost, and while that “tank” can dry out, there’s a fun mechanic done on that front. Basic actions will generally increase a small Red Mana gauge that can serve as a reserve, and will also give advantages on certain actions. For example, Calibretto can get a small heal boost when using Red Mana, while Knolan gets damaged when using it. It’s that whole duality of mana use that makes the difference between Battle Chasers: Nightwar and other RPGs.

Back when I reviewed the game on the Xbox One, I’ve reached one of the worries of most RPGs which is the overall progression system. While you can only battle with 3 characters at a time, there was no real experience distribution done to those inactive, which can make it hard to get all six at the same level. Plus, with the way experience was awarded sparingly and most dungeons are usually 2-3 levels above your current character, you’ll end up having to grind a lot. But thankfully a major patch was released within the first month of the game launch, which greatly altered the way the difficulty and experience curve was growing in the middle of the game. Nevertheless, this, of course, reinforces Battle Chasers: Nightwar’s lifespan, plus there are so many distractions on top of the main quests, such as side ones and the arena.

In terms of the Nintendo Switch version, the overall quality hasn’t really changed from the other platform releases. While it’s certainly more convenient to play on the go – as one of the very few turn-based RPGs on the console – the game suffers from some technical issue. Built on the Unity Engine, the recent update seems to have helped release the game on the console after a long delay, yet it still has serious irregular framerate in the majority of the gameplay phases except for the combat parts. Depending on the dungeon, and how crowded it is in terms of rendered objects or animations, you’ll feel like the game moves in rather slow motion or just overall heavy movements, but that’s just the framerate.

Nevertheless, Battle Chasers: Nightwar is fun to be played on the go, or just in the palm of your hands. Even after playing it for a while in docked mode, it doesn’t seem like the console uses more resource to stabilize the framerate, and loading times are not reduced either. Even on the Xbox One version, loading time could range within the 30-60 second mark, and it’s kind of the same on the Nintendo Switch even after months of updates and patches. Let’s hope more work will be done on the game to stabilize the stuttering, because it’s quite a shame, as Battle Chasers: Nightwar is a fun addition to the Nintendo Switch catalog.

Battle Chasers: Nightwar was reviewed using an Xbox One and Nintendo Switch downloadable code of the game provided by THQ Nordic. The game is also available on PlayStation 4 and PC in retail and digital store releases. We don’t discuss review scores with publishers or developers prior to the review being published (click here for more information about our review policy).

• Long lifespan
• A wonderful fantasy story
• A deep and demanding combat system.
• Quite a lot of content
• A progression that that fixed its grinding issues

• Those loading times can be painful
• Some really annoying stutters and framerate drops.

Now available on the Nintendo Switch, Battle Chasers: Nightwar has everything an RPG fan would like, whether it's a captivating universe, an original turn-based system or even the plethora of activities. Sadly while the core is great, the game still suffers from some technical problems even after delays and recent updates. 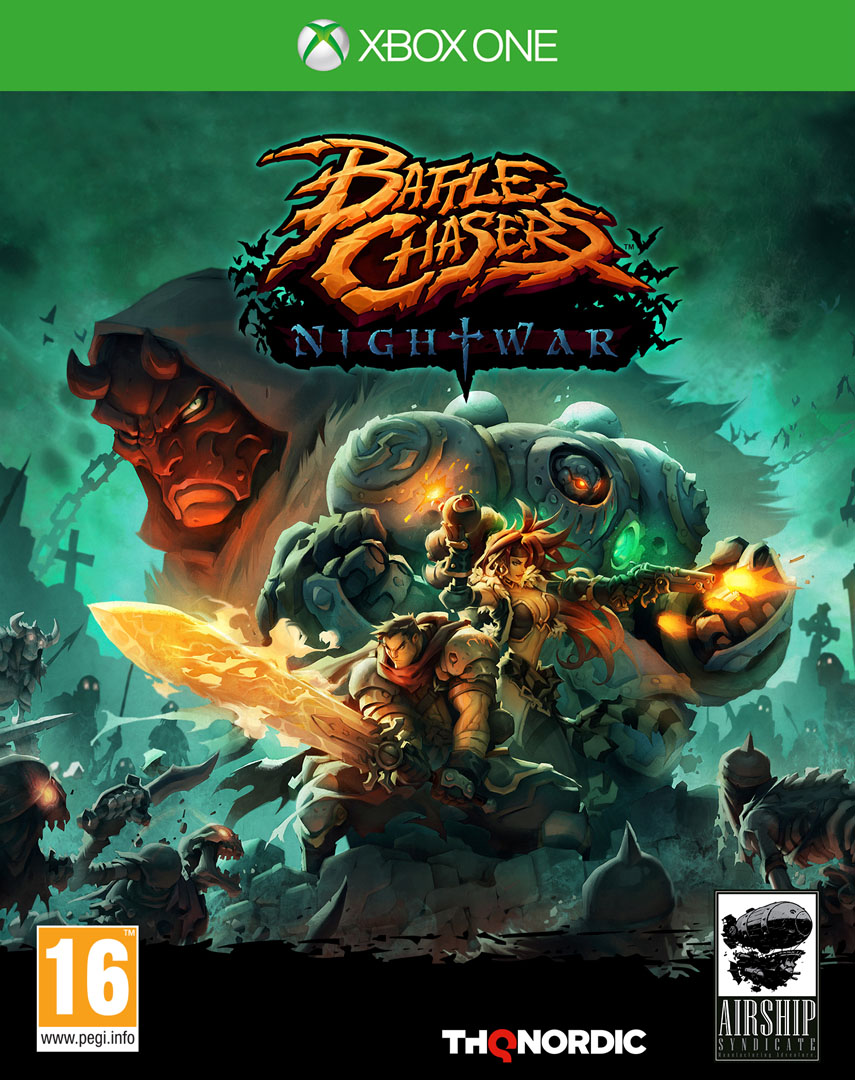