In the world, there are two categories of people. Those that are supposedly normal, even if that’s a very subjective thing to say, or they are seen as weird and awkward. If you were asked the question of which you were, and happen to hesitate then this party game known as Awkward is definitely your thing… But it’s not really a complex one, and I got to test it out on Nintendo Switch.

Being a big fan of the card and board games that really bring the “best” out of your friends, like Exploding Kittens, Cards Against Humanity or even the numerous options in Jackbox Party Box, the premise of Awkward caught my attention. The game’s basis is of a certain 1800s diabolical card game that was eventually banned, discovered by studio Snap Finger Click which decided to digitize it for our current generation of players. Now not sure if that story is real or not, but the whole point of the game is a series of questions that can people against other with very awkward situations.

In Awkward, the game plays with a series of rounds, where a set of questions are asked to two people in the room. The principle is simple: will you answer like the whole world or will you stand out? Depending on your answer, you will either be really predictable, or a revelation about yourself to the gang of friends might be a shocking one. On top of that, at the end of each round, the average answer by the community will be revealed, so you can see how awkward – or not – you are to the rest of the world.

You’re probably wondering what kind of questions you should expect from Awkward, am I right? Well, expect everything, and anything with this game. If you could only save someone’s life, would you choose to save a one-year-old or an 18-year-old? That’s the kind of game that will also push participants to reveal themselves and their true personalities. Plus with embarrassing questions that can lead to quarrels, such as when the game will ask if the player prefers the body or face of his life partner, then you might get a bigger problem on your plate.

Many questions have been written by Danny Gallagher, known for his work on Quiplash and Fibbage, as well as Joanna Haslam from Quiz World. It can be fun and host up to 6 players on the same machine, being asked questions in turn, but the greatest feature of this game was the direct feed and participation of up to 500,000 viewers via Mixer or YouTube, which sadly is only available on the other console versions.

Awkward is in itself a very weird game, but on the long run, I don’t see this last in my collection of board/card games due to the lack of variety, but mainly because of a lack of action visually. Awkward has a very limited set of scenes to show, but I also realize what makes the Jackbox Party Games great, and that’s the fact that there’s more game to play of course, but that I actually enjoy the silly commentator. Don’t get me wrong, Awkward is a great game with a party, but after trying it with just 2 or 3 people, you could feel the repetition. Then for those of you that are wondering what kind of experience this game can be playing it alone, then I wouldn’t even try as it’s insanely boring.

Awkward was reviewed using a Nintendo Switch downloadable code of the game provided by Snap Finger Click. The game is also available on Xbox One and PC via digital and retail store releases. We don’t discuss review scores with publishers or developers prior to the review being published.

Awkward is exactly what you think it is as a game. A fun party game that can get "awkward" but sadly doesn't have enough to keep you coming back like the competition.

Review: Thronebreaker: The Witcher Tales
Be the first to comment!
Leave a reply » 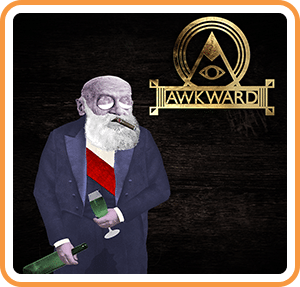