Review: Attack of the Earthlings

Attack of the Earthlings is a new strategy game in the vein of classics like XCOM where you manage a small team and take on your enemies in turn-based combat. However, this time around there’s a little twist to the formula.

Now I should say I love videogames. I play them all the time, and I’ll probably defend videogames loudly and angrily in a conversation given the chance. However, you can’t deny that video games can be a little, well, formulaic. Take sci-fi games. Usually the deal is that the bad guys are the weird-looking space dudes who wanna grab hold of Earth’s resources. Then along comes a hero (that’s you slugger) who saves humanity by massacring the chain of these aliens and coming together. Attack of the Earthlings flips the script, and it makes it so that the aliens are the good guys.

Things start off on X13, a planet somewhere in the galaxy, rich in minerals and populated by an insectoid race, the Swarmers. Greedy industrialists show up to start mining the place and it’s up to the swarmers to stop them. Attack of the Earthlings is pretty violent but it’s pretty clever in its violence. Basically you control the matriarch, and you lead swarmers in battle to snack on greedy humans. Once you murder a human and then chow down, you get grubs. Grubs can eat humans, more units, etc. It gets even more elaborate when you evolve your grubs into different units. Basically as you chow down on more humans you accrue biomass, and biomass becomes your currency.

A big part of Attack of the Earthlings revolves around stealth. Early on the matriarch is rocking it solo, so your goal is to take out humans by getting up close and personal and then going in for the kill. So while combat is a big deal in Attack of the Earthlings, you’re not meant to go in looking for a fight. You really wanna stick to the stealth tactics formula, as later levels feature more advanced and more complex units on the opposition.

I would say one of the biggest drawbacks of the game is its lack of replayability. Attack of the Earthlings isn’t really procedurally generated, so once you’ve run through it once, your incentive to replay declines. You can still try to switch it up but you’re in for more or less the same experience.

However it’s a good experience. Attack of the Earthlings is rather silly and even absurd premise hides a very clever take on big ideas like consumerism and globalization. While you take the role of the violent and somewhat primitive Swarmers, you get the sense that you’re defending what’s yours.

Attack of the Earthlings was reviewed using a PC digital downloadable code of the game provided by Team Junkfish. The review was tested on a PC running Windows 10, with an 8GB NVIDIA Geforce GTX 1070 fitted on a 4th Generation Intel i7 4790 3.6Ghz CPU and topped with 16GB of RAM. Attack of the Earthlings is also planned to launch on PlayStation 4, Xbox One and Nintendo Switch later on in the Summer of 2018. We don’t discuss review scores with publishers or developers prior to the review being published

Attack of the Earthlings is terrific indie strategy title that pushes you to be careful and manage your turns and resources. It’s morbid and overly violent at times, but it’s surprisingly clever and charming at the same time, and you get the sense that it has a lot to say. 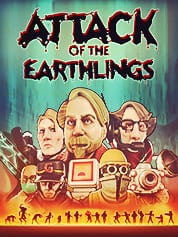