The title ‘Assault Spy’ feels a bit paradoxical, as ‘Assault’ and ‘Spy’ are two totally different actions with different results. But here we are with Assault Spy, an action hack and slash game from developer Wazen. As the title indicates, the game is actually fairly comical. You are in fact a spy (corporate spy to be precise) but you’re not actually involved in stealth. Rather, the game is based around hack’n’slash and melee combat.

One thing I noticed right off the bat is that this game is fast. They built the game on a solid engine, and so in terms of gameplay, there’s a good foundation to build on. You can always tell when you’re playing a work by a fan of the genre, and it really feels like Wazen’s developers are true fans. The game plays like classic action hack’n’slashers like Devil May Cry, albeit a little bit wackier. There’s a lot of running around and fast-paced movement, and you learn to make use of the dash feature if you wanna stay in one piece. Add in double jump and air dash and you have a movement system reminiscent of arena combat titles like Dissidia with the much more precise and fluid combat of Devil May Cry. It also has some nifty features; If you beat up enough baddies, you get Overclock mode, which lets you toughen up and get even more ridiculous. The game realizes that, while the genre is fairly common, it has a lot of bells and whistles to get the hang of, so it wisely introduces a training mode. This is a real pro, as you need a space to learn all the features of the combat and really get good at it.

I think what stood out to me the most is the game’s theme. As the name indicates, you are in fact a corporate spy going up against a shady corporation. However, it’s all very silly and tongue-in-cheek, and the game has a lot of fun with its setting. I started off picking Asaru (they didn’t tell me if the other character was locked and I’d be able to access her later in Early Access of if I needed to beat the game first). Oh, right, the game is in Early Access. It’s like the version of Early Access where the game is a building which only has a few of its floors built, as the game informs you upon selecting the single-player story mode that the story mode is not complete.

Asaru the corporate spy is accompanied early on by the bubbly and silly Kanoko, and their banter feels very Anime-ish. However, it’s anime silliness minus anime weirdness and that harem shtick where one dope has ten women fighting over him, so I’ll take it. I’d say another big selling point is that enemies aren’t your usual ‘zombies who mob you and tanky dudes’ fair. Most enemies use projectile attacks, so you need to zip around and use cover to avoid their projectiles, and then thump them when you get close enough. Thankfully, enemies aren’t spongy, so you don’t have to thump too hard. It wouldn’t be a stylish hack’n’slash brawler without a score counter and rating system, and that’s here as well. And of course, as with any hack’n’slash title, there are no frame drops because you can’t fight killer sentry robots while also fighting a janky rate.

The thing is, at the end of the day, this is still an early access title, and that means the range of enemies and challenges actually do feel somewhat limited thus far. You kinda get used to the initial enemy type (flat robots with lasers) and you only get a few others with a similar dynamic. I will also say that the dodging needs a little tweaking as it felt kind of wonky. Thus you really need to see this as a demo type of early access, with the promise of more to come. Wazen seems like they’re on top of things, and with the high-profile NIS as their publisher you know things are proper.

I had a crash or two but nothing too bad, and I expect it’s par for the course for an early access title. Aside from the relatively minor gripes, I enjoyed smashing robots in Assault Spy. I feel like I’m being irritating when I point this out, but I wouldn’t say no to a more intuitive control system on PC, as when I switched from controller to keyboard, I felt like I was at a real disadvantage. Even then though, the game has a ton of polish and it’s clearly a labor of love.

Early Access is all about supporting promising work by good developers, and while the game may seem pricey for what you’re getting, Assault Spy will give you a ton of fun combat for less than what AAA titles charge.

Assault Spy was reviewed using a PC downloadable code of the full game provided by NIS America. The game was tested on a PC running Windows 10, with an 8GB NVIDIA Geforce GTX 1070 fitted on a 4th Generation Intel i7 4790 3.6Ghz CPU and topped with 16GB of RAM. We don’t discuss review scores with publishers or developers prior to the review being published (click here for more information about our review policy).

The paint might still be drying on Assault Spy but there’s still a lot to enjoy here. It’s a very smooth action brawler and fans of the genre won’t be disappointed. Buyers should be aware that they’re basically buying an early build, so there’s not as much content, but the full release is clearly shaping up to be spectacular. 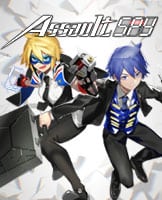