Ah, the retro platformer. Once a mainstay of the indie world, it has now become much less common. Indie gaming has spread its wings and new tools like Unity enable smaller studios to make bigger and more elaborate (albeit fundamentally simple) games. Now, I’ve always regarded retro platformers with a measure of suspicion. I mean, with virtual console and slightly less legal options you can experience a plethora of 16-bit and 8-bit classics that, despite their dated visuals, stand the test of time. Thus, a game that is basically indistinguishable from a game that came out in the 90’s (or even inferior) isn’t filling a niche we need. But let’s give Aggelos a fair shake here.

Well, to start with, Aggelos definitely commits to its theme. It is almost indistinguishable from an 8-bit classic (the game’s steam blurb likens it to a 16-bit classic, but I guess it can pass for either). Simple UI, a chiptune soundtrack, basic control and movements, so far so good. It’s got a pretty straightforward tale of a prophecy and a chosen warrior who must take on a great evil and save a princess. Also, I think it deserves credit for not really playing it for giggles; it’s a sincere story which, while simple, does actually try and develop its characters a little. Retro indie games spend so much time being ironic that a game deserves props for resisting the urge to constantly make jokes. In terms of structure, Aggelos is a Metroidvania. This means you go through the map until you reach an area that you can’t access, and then you’re meant to find a power-up to help you access it.

The thing is, Aggelos is so committed to its theme that it ends up being like the very first Metroid, in that it doesn’t really offer you a map to get around. This is a huge flaw in Aggelos and one that it tries to fix in various ways but doesn’t really manage to. There are signs and that to help you get around and the worlds aren’t excessively big, but it’s still annoying to have to backtrack and get around with a map. And you can’t reason that the map simplifies things too much; Super Metroid had a map and I’ve gotten lost in that game more times than Samus has turned into a morph ball.

The point of this rant is that creating a clone of a classic is a bad idea because classics had their great innovations hampered by obtuse design. Now, I realize I could be going off on the game because it decided to try and push me to explore more, but I just don’t think it’s a good way of generating a challenge.

Before you think this review is all negative, Aggelos has a ton going for it as well. For starters, it commits to the classic system and actually develops levels. Despite its tiny download size, Aggelos is a sprawling adventure, clocking in at just under 9 hours for me. Granted, I was a slow player and I took my time exploring the nooks and crannies.

Aggelos is a sidescroller, but it’s also a fairly basic action RPG with a levelling system that works fairly simply. While it seemed at first that this would play a bigger role, it didn’t. The thing is, Aggelos doesn’t ever get so difficult you need to adjust your loot or level. I’ma go ahead and count this as another plus, as once again it flaunts a typical indie tradition of making the game harder than a stale baguette to get reactions out of YouTubers.

Its levels, while small, have a ton of heart to them. Enemies have a distinct fantasy feel to them but they also feel cartoonish and cutesy at times. Bosses are carefully designed and have some of the best progression systems I’ve seen in a while. What elevated Aggelos for me is that it is, in essence, a labour of love. While it looks a lot like classic 16-bit games, it is, in fact, a very heartfelt tribute to them.

Aggelos was reviewed using a PC digital download code provided by PQube. The game was tested on a PC running Windows 10, with an 8GB NVIDIA Geforce GTX 1070 fitted on a 4th Generation Intel i7 4790 3.6Ghz CPU and topped with 16GB of RAM. We don’t discuss review scores with publishers or developers prior to the review being published (click here for more information about our review policy).

• No map
• Feels derivative of other classics

Aggelos sticks pretty rigidly to the classics script, and while that means getting bogged down by questionable design choices, it also makes for a great modern classic that relies on good level design instead of randomly generated levels 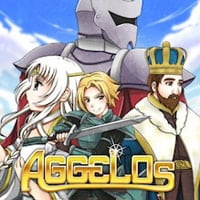 PQube Limited, Look At My Game