An animated series that has been popular for more than 10 years now, Adventure Time is back in a videogame adaptation with the weird name of Adventure Time: Pirates of the Enchiridion. While it’s not the first time that Jake the dog and Finn the human are both in a game, but it is their first turn-based RPG adventure that will have them meet Princess Bubblegum, BMO, or the Ice King to name a few of the characters from Adventure Time series. So what did Jake and Finn do this time? Well, seems like they are in a weird pickle, set to solve a strange case of melting ice, flooding the land of OOO and the understanding why pirates are attacking the kingdom.

Our story begins therefore on the land of OOO, where everything is peaceful until our two heroes wake up floating on a small dingy in the water. A flood engulfed the whole world, making travel by land almost impossible, and therefore with the help of a boat named Jeff, you will have to navigate between the different places. You find yourself in a small scale open world that can be explored according to our desires, discovering the Kingdom of Ice, Candy Kingdom or the islands that litter the map, in a system that reminds me a bit of the Legend of Zelda: The Wind Waker. It’s not a solitary travel to the sea like the latter, but a fun ride as Finn, Jake and eventually other companions that join you will have hilarious conversations and sing along tunes that are worthy of being in the show.

Your core team, composed of Finn and Jake, will eventually see its ranks reinforced throughout the adventure by other characters well-known fans of the series, such as BMO who will act as a support class and Marceline who’s like a healer in her own way. So of course, the base of the game is its old-fashioned RPG with turn-based battles. While it’s no revolution in the genre except that it is possible to use an item and either attack or defend during each of his character’s turn, the game is quite solid on that front, and the difficulty is well dosed.

You will have to choose your actions with pertinence and you have the choice between a simple attack, a super attack which you will be able to trigger after filling the special meter or even magic attacks. To use the latter, you will have to spend magic points that can be acquired in different ways but can be earned gradually for each action and turn. The strategic change here is that magic points are shared with your whole team, so be careful how you use them because some of these actions will save your life, like Marceline’ health regeneration ability. Sidequests will enhance the lifespan of the game and allow you to retrieve pages of the Enchiridion, a magic book from another galaxy, which will give you new powers.

So what about the game in terms of technicalities? Even after the day one update on the Nintendo Switch version, the framerate drops were present the most time, and sometimes even froze my console forcing me to reboot the machine. Following the second update, Outright Games seemed to have managed the framerate drops, and I haven’t experienced a game crashing bug so far, but I feel like the loading time are a tad too long. Nevertheless, as someone that enjoys the animated series, I’m glad that the game feels and looks exactly like its source material. My biggest regret for them though is the soundtrack or pretty much the lack of. This sadly kills the rhythm, and you spend most of the time listening to the sound effects of your boat splashing into the water, or grunts and screams during the combat phase.

In the end, Adventure Time: Pirates of the Enchiridion is a pleasant game, which can be a great starting point for newcomers in the RPG genre or fans of the animated series. While it’s rather short for an RPG, taking me less than 12 hours to finish – even with sidequests – the game got me smiling at all time with the countless amount of Adventure Time humor. But RPG veterans and more demanding players will definitely be annoyed by the technical issues, and I really hope for Bandai Namco and Outright Games to solve these quickly.

Adventure Time: Pirates of the Enchiridion was reviewed using a Nintendo Switch digital download code of the game provided by Bandai Namco. The game is also available on Xbox One, PlayStation 4 and PC via digital and retail store releases. We don’t discuss review scores with publishers or developers prior to the review being published (click here for more information about our review policy).

Adventure Time: Pirates of the Enchiridion is exactly what a franchise tie-in game is, mixing known gameplay mechanics and ideas to a world built by an iconic animated series, without really excelling anything. It's still a great entry point into the world of turn-based RPG for some and will definitely appeal to fans of the animated series for sure. 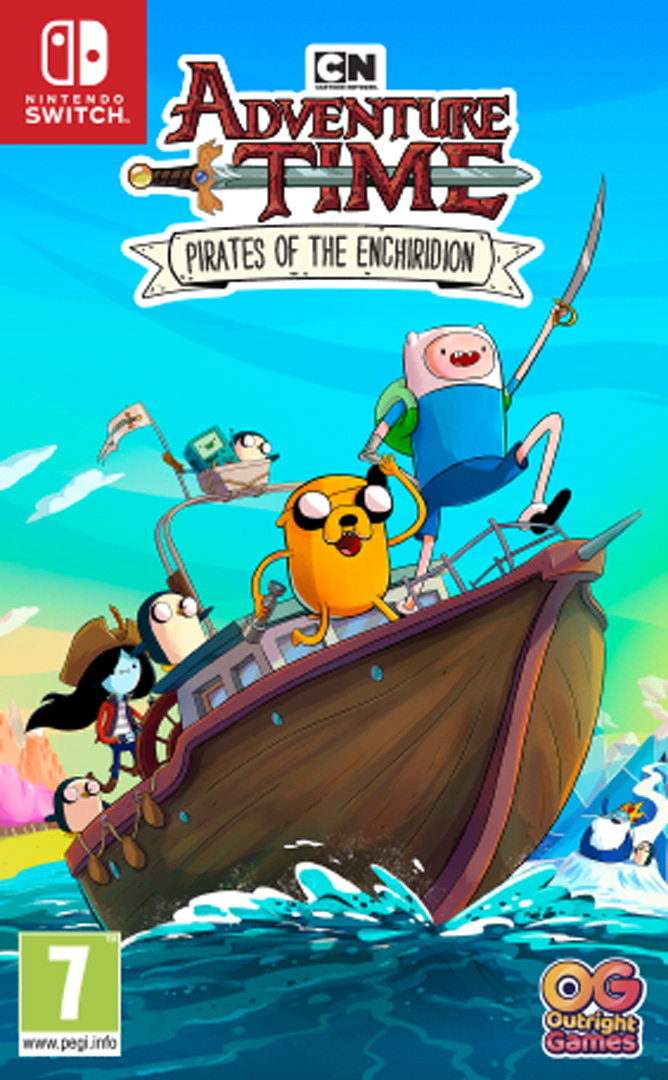