When it comes to the indie scene, most games shouldn’t be judged by its cover… Or whatever you want to call its equivalent. Some have strange art, others rely on the quirkiness of its 16-bit chiptune to actually tell a dark and sad story, others pick very vague titles. In the latter case, I believe that this is what Matt Bitner decided on when building A Robot Named Fight! on his own, a strange mixture of his most beloved inspirations, a merge between a Roguelite and Metroidvania. And so month after its release on PC, the game is finally out on Nintendo Switch, and I got the chance to review this really affordable – and indispensable – indie gem.

The story of A Robot Named Fight! is pretty simple. Everything was alright in a world inhabited by robots, until an abomination from the unknown, called the Megabeast, decided to come and spread havoc. Flooding the surface of the planet with disgusting organic alien creatures, it’s up to a robot named simply Fight – thus the title of the game – to take on the heavy burden to destroy the source of chaos. For this, you will have to venture in the underbelly of the planet, to retrieve old artifacts dating from a war that long since ended, which will hopefully help you in your fight against the Megabeast, but also reveal a darker story and one hell of an ending.

Now without going deeper into the story, fear of ruining it for some of you, let’s just jump into the core of the game: how is it actually a Roguelite and Metroidvania at the same time? Well, when it comes to the gameplay mechanics, the root of a Roguelite is there. If Fight is destroyed, another version of our robot will take its place with some of the abilities or weapons gained, which obviously will make the next attempt easier. In terms of playability, the old Super Metroid veterans will be thrilled, as the feeling of playing this game is almost identical to Samus’ title. The left stick is used to direct the character, the Y and B buttons are respectively for shooting (with no auto-fire) and jumping, but then the triggers are used for the aim rotation of your weapons within 45 degrees radius. Then if all of these mechanics weren’t enough, the game’s rooms are procedurally generated making basically each of your attempts a completely different experience. So yeah, talk about a melting pot of genres!

But that procedurally generated factor is one of the best parts of the highlight of the game. I never managed to see a pattern in the construction of these levels, and the textures, as well as the mix of elements, was always so interesting, making almost every death a worthy enough reason for a new experience. Sure some of these mixes sometimes feel bland, but you’ll never feel a routine in any way. In addition, your progression in the game is well conditioned by each weapon or skills you have obtained during each attempt. So whether you got a new sort heat-resistant armor or just a different kind of weapon shots, each of these upgrades expands the algorithm to create more complex procedurally generated levels. And all that gets even more exciting when you know that a second player can join the game, in an offline co-op mode, at any moment, to lend a hand.

A Robot Named Fight! was reviewed using a Nintendo Switch digital download code of the game provided by Matt Bitner Games. The game is also available on PC via digital release. We don’t discuss review scores with publishers or developers prior to the review being published (click here for more information about our review policy).

Even if it's developed by just a single person, A Robot Named Fight! is a great example of what passion and dedication in gaming design can accomplish. A must-have in the Metroidvania and Roguelite genre, especially if you want to play it on the go thanks to the Nintendo Switch. 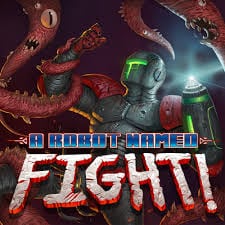